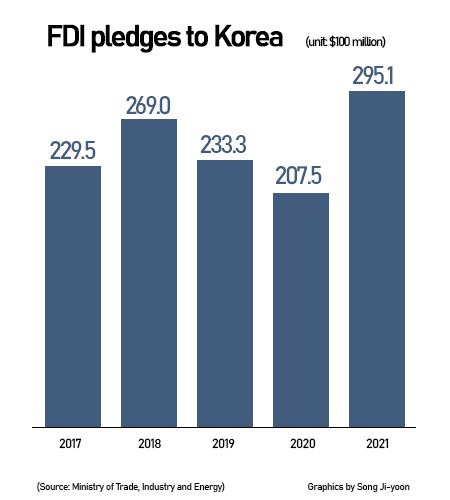 According to the Ministry of Trade, Industry, and Energy Monday, FDI in registered value totaled $29.51 billion, up 42.3 percent on year, and $18.03 billion in administered sum, up 57.5 percent on year. Both are historic highs.

The feat comes amidst prolonged Covid-19 outbreak and the global supply chain crisis, bolstering the economy on top of record exports of last year, said the ministry in a statement.

The service sector recorded $23.57 billion in commitments, up 64.2 percent from the previous year. Investment increased across industries, including information and communication (317.2 percent), wholesale/retail distribution (139.1 percent), and business support/leasing (833.0 percent). The manufacturing sector recorded $5 billion in FDI pledges, down 16.2% from the previous year.

Investments in K-New Deal fields such as digital and green also expanded. The solar module field attracted $10 million from China, and the Taean Offshore Power Plant drew $10 million from Germany.

Outlook for foreign investment to Korea this year however is murky due to monetary tightening, ongoing virus threat, and conflict between the U.S. and China, the ministry added.