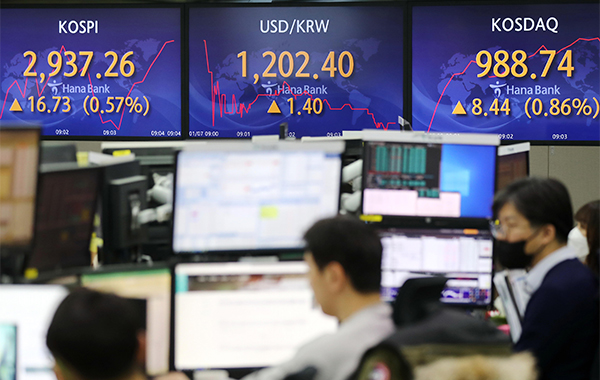 The South Korean won has broken the psychological level of 1,200 versus the U.S. dollar Thursday and may stay exceptionally weak to aggravate inflationary pressure amid surging imported fuel cost on faster monetary tightening program in the United States and worsening economic uncertainties at home and abroad.

The sharp weakening in the Korean won stemmed from the scare over a triple tightening by U.S. monetary authorities faced with inflation at near 40-year high. Latest minutes from the U.S. Fed’s December meeting suggested the U.S. central bank is not just mulling faster lifting in interest rates, but also move to reduce its bond holdings, on top of cutting back monthly bond purchases. It had taken years for the last tightening program after quantitative easing versus Wall Street meltdown in 2008. The U.S. had first reduced bond purchases, raised interest rates, and then rolled back its balance sheet by reducing holdings, thus sucking liquidity, incrementally across many years. But this time, the triple tightening could take place at much shorter span of time.

Fed Chair Jerome Powell is expected to give further details during his hearing for second term on January 11, local time. A separate hearing is scheduled on January 13 on nomination of Fed Governor Lael Brainard to be vice chair.

Moon Jung-hee, researcher at KB Kookmin Bank, said that the U.S. dollar will hover 1,200 won for a while amid uncertainties over U.S. monetary actions.

The local currency could also be weighed down by the legislative move to create a supplementary budget before the March presidential election on top of this year’s record-sized budget which could further worsen financial integrity through increased debt issues amid record debt ratio versus the gross domestic product.

Sung Tae-yoon, economics professor at Yonsei University, said that a sharp increase in bond supply increases uncertainty on the Korean economy, which pressures the local currency to weaken.

China’s economic conditions is also expected to be a factor influencing local currency as the Korean won couples with the movement of the Chinese yuan.

Shin Kwan-ho, economics professor at Korea University, said that the Chinese economy has been worse than expected and it is likely that the yuan will weaken against the U.S. dollar.

Sharper weakening in the local currency affects other capital markets as it could prompt foreign investors to take out their funds.

Foreign investors on Thursday offloaded 125.8 billion won ($104.7 million) in holdings in the secondary Kosdaq market as they seek safer assets amid growing uncertainties.

The weakening won could accelerate the Bank of Korea’s rate increases. A continuation of weakening currency would lead to a rise in import prices that can spur stagnation and foreign capital withdrawal.