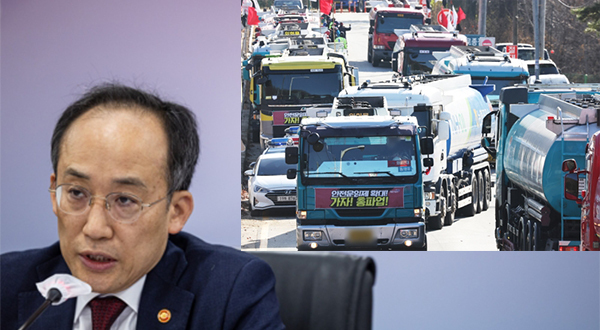 While presiding over a meeting with representatives from small and mid-sized firms on Thursday, he stated that truckers’ group action caused serious damage to the nation’s effort to overcome the economic crisis. “There would be no future for South Korean corporations,’’ he added.

Thousands of truckers have been on strike since last week, demanding the government’s guarantee of “a wage for safe operation.” The government met with representatives of the unionized truckers Wednesday, but failed to narrow their differences.

Minister Choo expressed concerns, saying, “The continued strike will weigh down the economy when the nation’s exports have decreased amid deteriorating external conditions.” Truckers’ action since Nov. 24 has caused disruptions in cargo shipments and exports, hurting the nation’s overall economy. He promised to provide support to small and mid-sized firms to help them minimize losses.

Korea Federation for SMEs urged the government to enforce punishments against illegal acts by truckers such as disrupting transport of goods.