The South Korean government is readying unprecedentedly stern action as well as dialogue Monday against the nationwide strike by cargo union members affiliated with the belligerent Korean Confederation of Trade Unions that has caused a paralysis in container deliveries as well as construction, steel making, and refining activities.

Container traffic at 12 nationwide ports stopped at 2,788 TEU (TEU: 20 foot equivalent units) as of 5 p.m. Sunday, just 7.6 percent of the usual daily average of 36,655 TEU, according to multiple industrial sources.

Loading activities have been ceased at key ports to the capital region of Pyeongtaek and southern coasts of Ulsan and Gwangyang, home to cement, steel, petrochemical refining facilities.

According to the Korea Cement Association data, 9,000 tons, or only 9 percent of 103,000 tons of cement planned for shipment on Saturday made their deliveries. Combined shipment on Nov. 24 and 25 also came under 20,000 tons, which is only one-tenth of the normal 200,000 tons. The association estimated the damage on the cement industry due to the strike has reached 9.4 billion won ($7 million) per day and 46.4 billion won in total so far.

The strike is expected to affect the cement industry even more from Monday as cargo truckers’ union is blocking major cement factories like Hanil Cement and Sungshin Cement, making it difficult for non-union members to carry out shipments via land.

The cement producers are shipping some cement through rail transport but it is not enough to meet demand.

The Cargo Truckers Solidarity launched an indefinite strike Thursday, the second collective action since its week-long strike in June, demanding the government to guarantee minimum freight rates for drivers’ safety and livelihood.

According to the Ministry of Land, Infrastructure, and Transport, entry and exit at major ports in Korea fell to 35 percent of normal times due to supply disruptions over the weekend, adding more gloom and risk to the industry-heavy economy entering slowdown.

An analysis by Maeil Business Newspaper and Federation of Korean Industries showed that 17 strikes at major industry sites such as Hyundai Motor, Kia, Hyundai Heavy Industries, and SPC between 2017 and 2022 have caused a cumulative damage of 6.5 trillion won.

Oil tankers have also been grounded and a further delay could cause shortage of fuel nationwide.

About 70~80 percent of truck owners of Korea’s four major refiners - SK, GS Caltex, S-Oil, and Hyundai Oilbank ? are aligned with the union.

The government has stocked two weeks’ worth, but shortage is inevitable if strike prolongs. 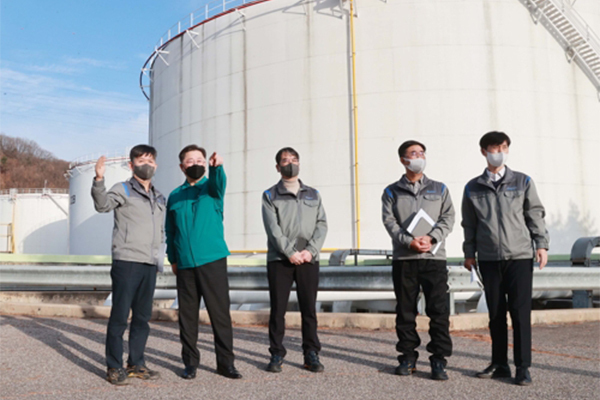 Park Il-jun, second vice minister at the Ministry of Trade, Industry and Energy, on Sunday visited an oil reservoir managed by Daehan Oil Pipeline Corporation in Pangyo, Gyeonggi Province, and monitored shipments of gasoline, diesel, and other oil products.

Construction sites have become idled due to shortage of concrete.

“Ready-mixed concrete that is shipped in wet condition can be stored at final demand site for about two days,” said an unnamed industry official. “Cement supply has been nearly halted from Friday, leading to difficulties in ready-mixed concrete production. This in the end would cause a halt in construction sites.”

Most of the car carriers at automotive production sites including Hyundai Motor’s Ulsan factory have halted operation, making vehicle consignment inevitable. Shipments of steel have also been disrupted via road and are carried out limited only by rail and sea.

The government and Cargo Truckers’ Solidarity are expected to sit down for their first negotiations Monday at the government complex in Sejong City to seek solution to the walkout but differences remain over permanent implementation of the Safe Trucking Freight Rates System and extension in item application.

The government is mulling the option of invoking the trucking transport business act in some industry sectors like cement industry forcing the unionized truckers to commence business to avoid criminal action, which would be the first time since the law was enacted in 2004.