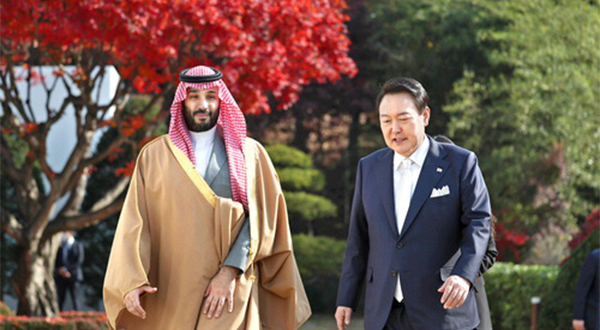 The royalty second to the king was the first visitor to President Yoon Suk-yeol’s renovated presidential residence in Hannam-dong in central Seoul and held discussions on a range of potential ties in the fields of energy, defense, and infrastructure and construction.

The two leaders agreed to set up a strategic partnership committee and promote joint projects in a more systematic and practical manner.

“Saudi Arabia is Korea’s largest trade partner in the Middle East and also an overseas construction partner,” Yoon said. “We have been partners in economy and energy security. Now is the right time to upgrade bilateral ties to a new level.”

During the Crown Prince’s visit, Korea and Saudi Arabia signed 26 memoranda of understanding (MoU) in celebration to the 60th anniversary of diplomatic ties. The two governments opened a Korea-Saudi Investment Forum in central Seoul where investment agreements worth $30 billion were signed.