BOK signals a rate hike in Nov on optimism on achieving 4.0% growth this year 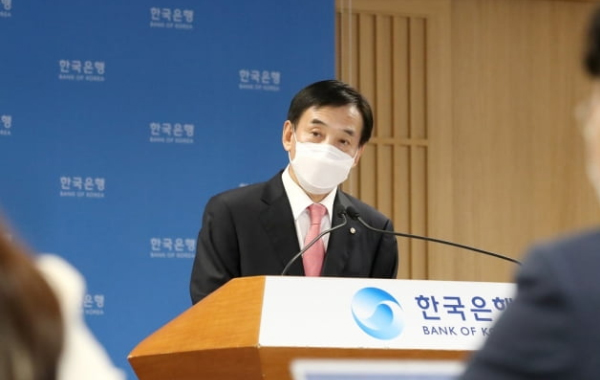 The South Korean central bank Tuesday indicated the next hike would come in November after it chose to pause in October after a raise in August as it remained positive of achieving 4.0 percent economic growth this year despite ramifications from expensive fuel costs and disruption in global supply chain.

“We chose a freeze this month but would decide a hike upon studying various factors. The majority opinion from monetary board members was to study a hike, if not for unexpected event,” Bank of Korea Governor Lee Ju-yeol said in a press briefing after the monetary policy meeting that has kept the overnight call rate unchanged at 0.75 percent.

“We will consider additional hike in the next meeting (in November) if the economic performance is in line with expectations,” he said. The government would release preliminary third-quarter gross domestic product data last this month.

The vote for a freeze this time had not been unanimous.

Two dissidents were Lim Ji-won and Suh Young-kyung out of the seven-member monetary policy board who argued for a back-to-back increase following the 25-basis-point hike in August from a record low of 0.50 percent kept since May last year amid Covid-19 fallout.

Most of his comments backed the rationale for additional rate increase.

“Looseness in monetary policy has actually expanded despite the last hike due to accelerated economic growth and inflation,” Lee said. 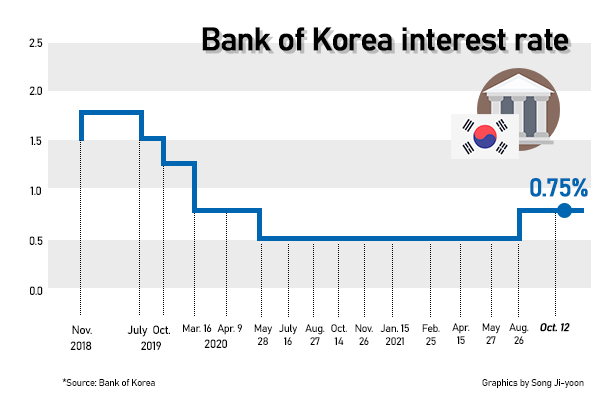 이미지 확대
He argued the financial imbalances caused by preference of risky assets and excessive borrowing in pursuit of big profit have not eased. “Monetary policy must help” to address the imbalances if government actions cannot contain them alone, he added.

The nation’s private sector debt snowballed to a fresh high of 1,800 trillion won as of end-June, but the gains may have eased in recent months as lenders have suspended or scaled back consumer loans under government pressure.

Inflation poses ongoing concern. The consumer price index in September added 2.5 percent on year and the headline inflation for the third quarter reached 2.6 percent, the highest since the last peak 2012 and hovering above the policy target of 2.0 percent for the sixth straight month.

But he dismissed concerns about stagflation, citing the Korean economy’s solid growth performance.

The BOK kept its growth target unchanged at 4.0 percent while annual inflation may exceed 2.1 percent projected in August, he said.

“The Korean economy is likely to continue its recovery amid resilient exports and investment as private consumption is forecast to improve gradually on the back of climbing vaccination rates and the resultant expansion of economic activity,” the BOK said in its Monetary Policy Decision.

Recent data suggested a slowdown in the pace of global economic recovery due to surging crude oil and commodity prices. Oil prices climbed to a seven-year high last week amid scare about energy crunch in China that may aggravate supply bottleneck as well as global inflationary pressure.

The country’s exports so far have stayed resilient, soaring 63.5 percent on year in the first 10 days of October after double-digit growths throughout year to push shipments to a record high as of last month.