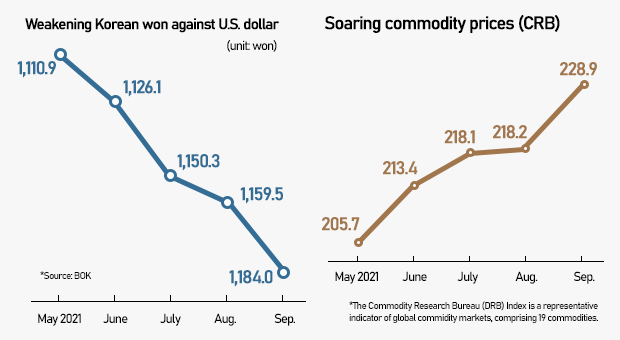 “Korea’s economic recovery is slowing on the contraction in the face-to-face service industry, and downside risks are running high amid growing global uncertainties,” according to KDI’s monthly report on economic trends released on Thursday.

The institute warned of “uncertainty” in the Korean economic recovery since July last year, but it is the first time since April this year that the think-tank observed “downside risks”.

The steady rise in energy and commodity prices including crude oil has been driving up producer and consumer prices, the report said. The strong commodity prices and global supply shortages have deteriorated the manufacturing business confidence. The business sentiment index (BSI) for the manufacturing industry has shrunk from 101 in July to 96 in August, 94 in September and 92 in October.

“Some businesses including automobile sector are suffering the ongoing supply crunch for intermediate goods and distribution disruptions,” said Jung Kyu-chul, head of the macroeconomic analysis and forecasting department at KDI, warning that the U.S. monetary tightening and China’s Evergrande debt crisis could weigh further on the recovery momentum of the manufacturing industry.

이미지 확대
“Global industrial production and goods trade continued to stall, and major countries saw a contraction in corporate sentiment due to the growing concerns over economic situation in the US and China,” according to the report.

The rapid growth at above 2 percent in consumer prices over the past six months is another cause of concern for the Korean economy. According to Statistics Korea data, prices of petroleum and livestock products increased sharply at 22 percent and 13.9 percent, respectively, in September compared to the previous year. “The recent price hikes are driven by supply issues instead of demand,” said Jung. He said the continued inflationary pressure may have a negative impact on the economy.

The country’s economic and financial leaders are trying to stabilize the financial markets that have been volatile in recent weeks. The country’s vice minister of economy and finance Lee Eok-won held an emergency meeting on Thursday after the Korean stock, currency and bond prices dipped amid concerns over external risk factors.

Due to the possibility of increased volatility in the financial market at home abroad, he pledged to strengthen oversight on the market situation and take immediate actions when deemed necessary.

Finance minister Hong Nam-ki also convened a ministerial meeting on Thursday to discuss ways to deal with the U.S. request to submit data of Korean chip makers. The U.S. government has asked Korean chip makers including Samsung Electronics and SK hynix to hand out data on chip production, inventory, orders, sales and clients by Nov.8.