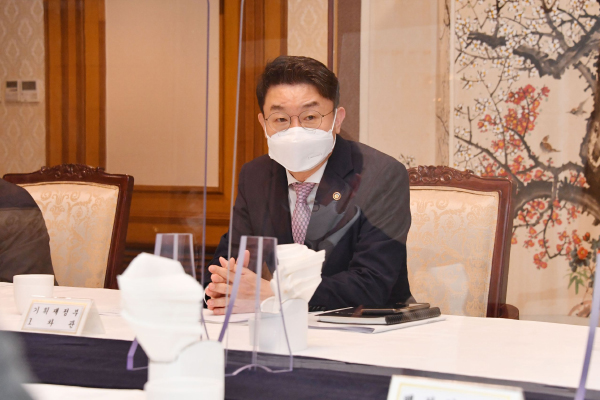 [Photo by Ministry of economy and finance]

The Korean government could take action to stabilize the foreign exchange and financial markets if deemed necessary, upon finding the latest volatility in the capital market “excessive”, according to vice minister of economy and finance.

The verbal intervention came after the Korean stock, currency, and bond prices have tumbled to annual lows due to anxiousness over U.S. monetary tightening, inflationary pressure from spike in oil and other commodity prices, and China’s Evergrande debt crisis.

“Although there is possibility of increased volatility at home and abroad, Korean markets have responded somewhat excessively despite strong fundamentals,” said Lee Eok-won, the country’s vice minister of economy and finance, on Thursday at a macroeconomy evaluation meeting.

“We must be more comprehensive and objective in responding to market developments by taking into account of overseas judgment of the economy,” he added, according to a press release by the finance ministry.

The benchmark Kospi had plunged 7 percent and the Korean won weakened to annual lows against the U.S. dollar over the past two weeks. The market has been destabilized by the possible external risk factors including the U.S. imminent tapering, growing inflationary pressure, potential collapse of China’s real estate giant Evergrande Group and the U.S. debt ceiling breach risk.

But Lee emphasized that the Korean economy has strong fundamentals, as shown by the sale of sovereign bonds at the cheapest-ever rates, the continued foreign buying in won-denominated bonds that boosted foreign bond holding to above 200 trillion won ($168 billion) as of the end of September, strong export growth and outlook of an economic growth outlook of 4 percent for this year.

The country sold $500 million in 10-year notes and 700 million euros ($800.1 million) in five-year green bonds on Thursday at their cheapest rates thanks to the overwhelming demand.

In order to respond to the market jitters, the government will be watching to financial and foreign exchange markets around the clock and take “timely” measures when deemed necessary.

Financial authorities will respond “proactively” to address to rising market yields by adjusting the sales volume of treasuries, he added.