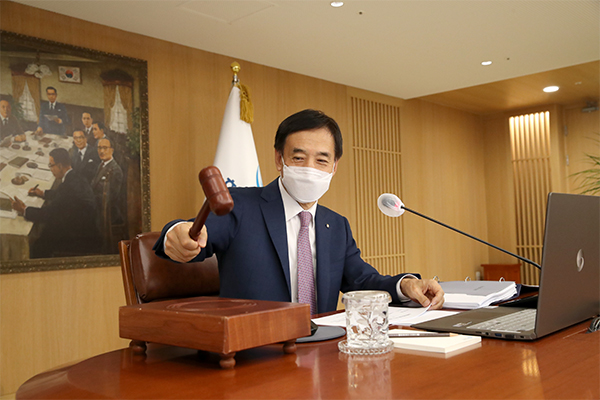 Nearly nine out of 10 bond experts in South Korea project the Bank of Korea will pause in normalizing the benchmark rate from sub-1 percent level at the monetary policy meeting next week due to volatile external factors.

According to a survey conducted by the Korea Financial Investment Association (KOFIA) on bond traders, 87 out of 100 who responded anticipated the central bank would freeze its policy rate at 0.75 percent at the rate-setting meeting scheduled for next Tuesday.

The bet on an inaction rose from 67 ahead of the last meeting in August when the rate was raised from the record low of 0.50 percent. The other 13 predicted another rate hike, down from 33 in earlier survey.

“Although another rate hike is expected to take place within the year to address the imbalances in the financial market from lush liquidity, the development of uncertain factors from the debate on U.S. debt ceiling and the ongoing default crisis involving China’s troubled property giant Evergrande Group may have persuaded more to bet on a freeze,” the association said.

In August, the BOK raised its base rate by 25 basis points to 0.75 percent from the historic low of 0.50 percent. It was the first rake hike since November 2018, and the BOK governor indicated additional raise to address to inflationary pressure and financial imbalances.

After next week, the BOK has one more rate-setting meeting left for the year in November.

The bond market survey index (BMSI) came to 93.5 for October, up 6.2 points 87.3 from September, the association said. A reading below 100 indicates there are more pessimists on the outlook for the bond market and vice versa for a reading above 100.

The improved confidence was driven by strengthening appetite for safe assets due to the base effects from the policy rate hike in August.

Expectations for an imminent rate hike heightened by the September inflation data published on Wednesday which showed the consumer price index at 2.5 percent and the third-quarter average at 2.6 percent, the highest in nine years and above the policy target of 2.0 percent for the sixth straight month, have also eased.