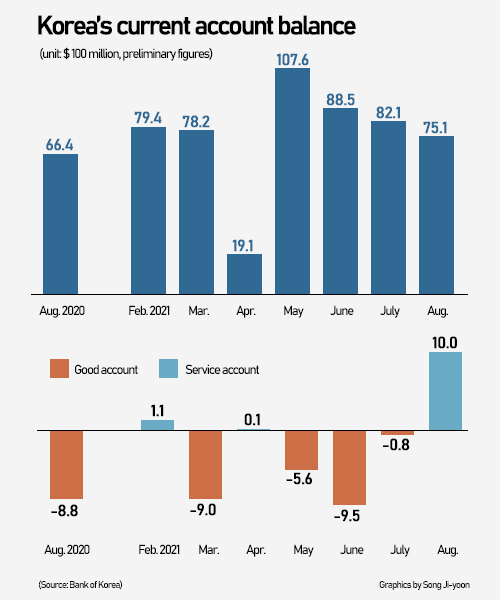 이미지 확대
South Korea maintained its current account surplus streak for the 16th month in a row in August, although goods surplus was trimmed due to spike in import cost of commodities, central bank data showed Thursday.

The goods account posted a surplus of $5.64 billion, down $1.45 billion from a year ago due to a rise in goods imports driven by higher commodity prices.

The services account recorded a surplus of $1 billion, which turned around from a deficit of $880 million a year ago to reach an all-time high in nearly 13 years after $1.48 billion in October 2008.

In services account, transportation account registered a surplus of $1.52 billion in August versus a surplus of $420 million a year ago thanks to the strong global cargo demand.

The travel account, however, recorded a deficit of $610 million, widening from $420 million a year ago.

Direct investment of Koreans overseas increased $5.33 billion while that of foreigners in Korea $590 million.

In securities investment, Koreans’ investment added $5.38 billion while that of foreigners fell $3.12 billion.