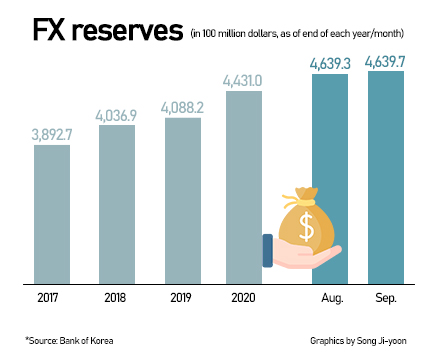 이미지 확대
South Korea’s foreign exchange reserves hit a fresh historic high of $464 billion at the end of September as a rise in profit gains from foreign currency-denominated asset investments more than offset a fall in value of non-dollar assets from the strengthening U.S. dollar, data showed Wednesday.

According to data released by the Bank of Korea, the country’s foreign exchange reserves came to $463.97 billion as of end of September, up $40 million from the previous all-time high of $463.93 in August.

The BOK noted that the value of non-dollar assets decreased due to the stronger greenback but profits from investment of foreign currency assets increased.

Securities, including government and corporate bonds, gained $1.05 billion from a month ago to $419.35 billion, and special drawing rights from the International Monetary Fund $190 million to $15.38 billion.

Deposits, meanwhile, fell $1.15 billion to $19.85 billion, and the reserve position, or reserve tranche purchases a member may claim from the IMF, declined $50 million to $4.6 billion.

Korea was the world’s eighth-largest holder of foreign reserves as of end of August. China was the largest holder with $3.2 trillion, followed by Japan with $1.4 trillion, and Switzerland $1.09 trillion.