South Korean inflation has stayed above policy target of 2 percent for the sixth straight month on higher prices across the board from food to commodities to average at 2.6 percent in the third quarter, the strongest since the last peak of 2012.

According to Statistics Korea on Wednesday, the country’s consumer price index (CPI) added 2.5 percent from a year ago to 108.83 in September, a tad eased from 2.6 percent in July and August.

The CPI has been above the 2 percent targets since April, the longest streak after between August 2009 and June 2012.

The Bank of Korea during the last monetary policy meeting raised the policy rate from a record low of 0.50 percent to 0.75 percent amid signs of inflationary buildup.

In the July-September period, the headline inflation reached 2.6 percent, the highest since 3 percent in the first quarter of 2012.

Prices of agricultural, livestock, and fishery products soared 3.7 percent in September from a year ago. The growth slowed from double digits in the first half of this year and 9.6 percent in July and 7.8 percent in August.

Prices of industrial goods gained 3.4 percent, the highest since 3.5 percent in May, 2012. Prices of processed foods jumped 2.5 percent on higher oil and milk prices, and petroleum 22 percent.

Prices of services jumped 1.9 percent in September from a year ago. Prices of public service gained 0.1 percent while those of individual service 2.7 percent and housing 1.7 percent. 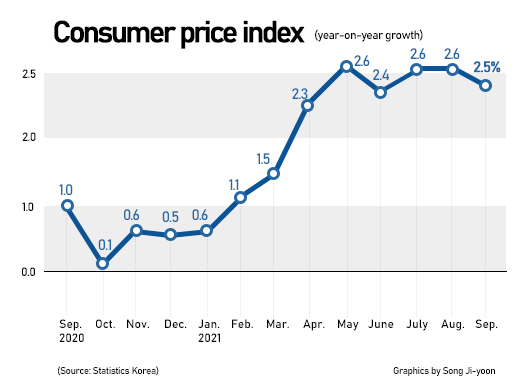 Eo Woon-sun, an official at Statistics Korea, said that prices of individual services, agricultural, livestock, and fishery products, and petroleum had so far led acceleration in consumer prices but in September growth came on higher prices of processed foods.

The official added that a slowdown in the increase in agricultural, livestock, and fishery prices is a downward factor but there are more upward elements.

“Personal service prices are likely to continue to gain on consumer sentiment rebound,” Eo said. “Prices of processed food and industrial goods are likely to go up on higher international oil and milk prices, on top of higher electricity cost.”

The Bank of Korea raised this year’s inflation outlook to 2.1 percent from 1.8 percent. But many think inflationary pressure to strengthen, given the volatility in food and commodity prices amidst power crunch in China and elsewhere.

Some are betting on back-to-back hike move in next week’s BOK rate-setting meeting as preemptive move against inflationary buildup.