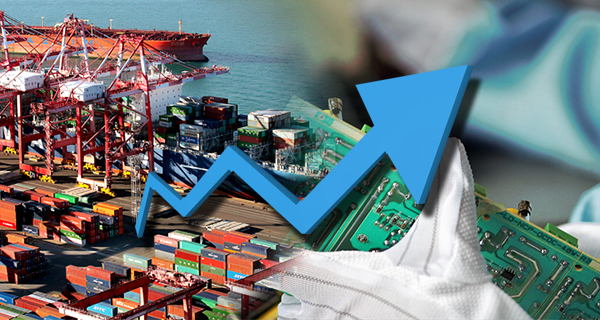 According to data released by the Ministry of Trade, Industry and Energy on Friday, the country’s outbound shipments in September jumped 16.7 percent from the same month last year to $55.83 billion. It marks the highest monthly figure since the related data became available in 1956. The previous record high was set just two months ago in July at $55.48 billion.

The all-time high figure was achieved despite two days shorter working days in September due to Chuseok holiday. Daily exports also marked a record-high of $2.66 billion.

The on-year growth rate, however, slowed down from 34.8 percent in August on weaker low-base effect.

Exports of eight mainstay items out of 15 gained in September, with intermediary goods such as semiconductors, petrochemical products and steel as well as IT products including displays, wireless communication devices and computers posting a double-digit growth rate.

Chip exports surged 28.2 percent on year to $12.18 billion, the highest record for this year and second-highest in history.

Shipments to nine major regions climbed, with exports to the New Southern region, including ASEAN nations plus India, hitting a record high. Exports to the United States and European Union also reached the highest for September.

Imports jumped 44 percent on year to $51.56 billion in September. Trade balance reached a surplus of $4.2 billion, extending the black figure for the 17th straight month.

“Dismissing concerns on sluggish export growth in the second half of the year, the country’s exports in the third quarter surpassed those of the first and second quarters,” noted the trade ministry, projecting this year’s total exports turn into surplus for the first in three years if the country achieves more than $44.8 billion in exports in the remaining three months.

Despite the country`s stellar trade report, the Kospi fell 1.41 percent to 3,025.52 on Friday morning due to a plunge in U.S. peers.