The benchmark Kospi closed 0.41 percent lower at 3,127.58 Thursday after touching 3,107.98 during the trade that opened after a three-day Chuseok holiday break.

The secondary Kosdaq retreated 0.94 percent to 1,036.26 as the Korean markets somewhat reflected overseas losses during their break. The won fell 0.68 percent to 1,176 won against the U.S. dollar.

The property giant saw shares slump to its seven-year low on disclosure of snowballing debt.

Lee Eok-won, vice minister of economy and finance ministry, on Thursday warned of volatility from the deleveraging of the Chinese company and normalization in the ultra-loose monetary policy in major economies. 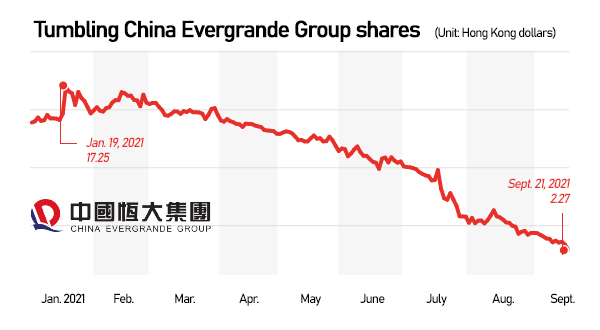 He stressed on the need of risk management and vigilance against the negative impact on the Korean market.

The Fed policymakers maintained its current target interest rate in the range of 0 percent to 0.25 percent and will continue buying a total $120 billion in treasuries and other assets each month. Fed Chairman Jerome Powell, however, noted that tapering “may soon be warranted” and that participants generally viewed that “so long as the economic recovery remains on track, a gradual tapering process that concludes around the middle of next year is likely to be appropriate.”

He also saw the possibility for increased volatility from the Evergrande risk.