South Korean payroll additions plateaued at around 500,000 for the third straight month in August amid raging Delta variant that cut business hours to curb daily infection cases in four-digit numbers, but the jobless rate was lowest in early eight years.

According to data released by Statistics Korea on Wednesday, the number of employed stood at 27.6 million in August, up 518,000 from a year ago. The addition has been mired in 500,000 level with the count decreasing from June.

Korea has been under strict mitigation rules due to the resurgence of Covid-19 in line with the rise of Delta variant. The manufacturing sector lost jobs more than other sectors in the month.

Finance Minister Hong Nam-ki maintained that the country’s job market was still on path of recovery, especially employment for those aged between 15 and 29.

He found “The job market has returned to 99.6 percent of the pre-pandemic level in February 2020.”

The country is also making up the losses from virus resurgence through public job creations in public administration and health and welfare sectors and non-face-to-face, digital sectors, he added.

The wholesale and retail industry shed the largest number of jobs by 113,000 in August, and the accommodation and restaurant sector 38,000 jobs during the same period, marking the second month of loss.

The number of employed in the manufacturing sector also fell 76,000 in August from a year ago, marking the steepest loss in eight months after 110,000 in December last year largely owing to production disruption in the automotive sector. 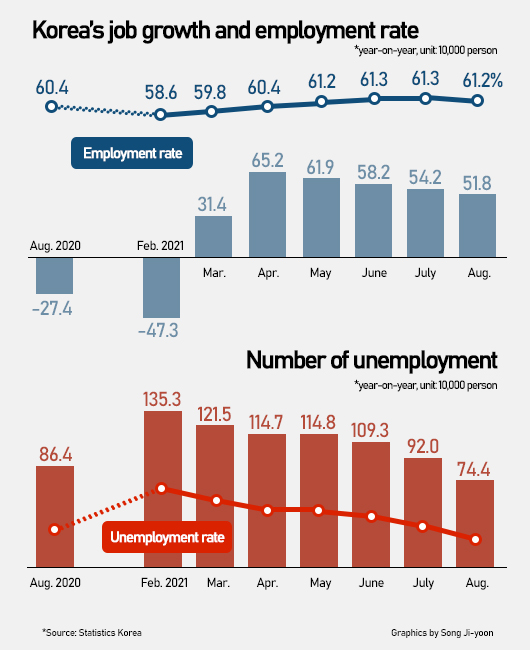 The number of self-employed with non-paid hires, meanwhile, gained 56,000 in August as individuals turned to unmanned sale service sectors such as by opening up kiosks amid stricter social distancing rules.

The employment rate for those aged 15 years and older rose 0.8 percentage point to 61.2 percent in August from the same period a year ago.

The number of unemployed fell 120,000 from a year ago to 744,000 in August. The jobless rate was down 0.5 percentage point on year to 2.6 percent, marking the lowest for the month since the agency began compiling related data in 1999 and weakest reading since November 2013.

The number of non-economically active population decreased by 106,000 in August from a year ago to 16.8 million, marking a six straight month of fall.