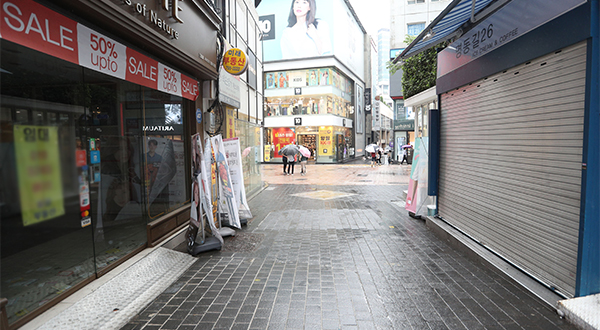 이미지 확대
Four out of 10 solopreneurs in South Korea are studying going out of business as they cannot sustain the losses from rigorous social distancing rules from drawn-out Covid-19 crisis.

According to a survey done by Mono Research on commission from Korea Economic Research Institute on 500 self-employed people from Aug. 10-25, 39.4 percent of respondents said they are weighing the option of shutting down business.

Nine out of 10 small business owners said their sales have declined since July 6, the day when the country first confirmed more than 1,000 daily Covid-19 cases, compared with the previous months. The decline averaged at 26.4 percent.

Similar portion of 89.2 percent said their monthly average net profit has also dropped by an average of 25.5 percent compared with the period before the fourth wave of infection.

Six out of 10 self-employed people or 60.4 percent said they have reduced debt compared to January 2020, right before the pandemic, due to the fear of the interest rate hike (29.5 percent), borrowing limit (22.9 percent) and possibility of business closure (19.6 percent). The remaining 39.6 percent said their debt has increased due to the rise in fixed cost (49 percent), debt interest payment (23.6 percent) and material costs (16.7 percent).

Three out of 10 or 28.4 percent of the surveyed said the government should increase its compensation for their losses from the business restrictions. Almost 25 percent requested subsidy for rent, 16.5 percent expanding vaccination and 12.7 percent extension of debt maturity.