Korean govt proposes another record budget of $520 bn for 2022

The Moon Jae-in government is keeping up record budget streak until the final year of the presidential term, proposing another supersized budget of 604.4 trillion won ($519.9 billion) for next year to ensure the economy is out of the Covid-19 downturn.

The Ministry of Economy and Finance on Tuesday packaged 604.4 trillion won budget for 2022, up 8.3 percent from original budget for 2021.

Since Moon was inaugurated to a five-year term in May 2017, fiscal expending growth more than doubled from the past conservative governments. The original budget (without counting supplementary increases) rose 7.1 percent in 2018, 9.5 percent in 2019 and 8.9 percent in 2021.

The proposal endorsed by the Cabinet will be submitted to the National Assembly on Friday for approval.

“We have to put an end to the Covid-19 crisis and strongly bolster the economy,” said Ahn Do-geol, the second vice minister of finance. “The government will maintain the expansionary fiscal spending next year to respond preemptively to the widening social gaps and establish infrastructure to help the country join the ranks of advanced countries.”

The government hopes to finance the budget through tax revenue increase rather than debt. 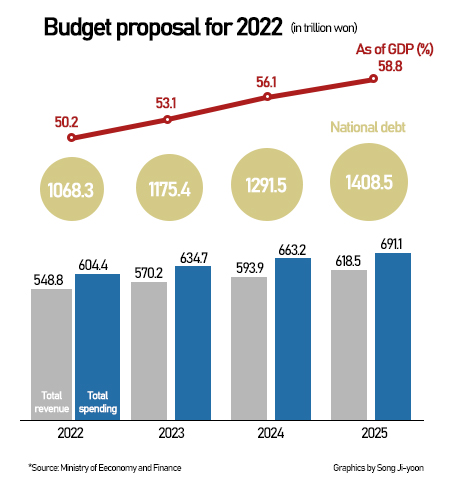 이미지 확대
The government estimates its gross tax revenue would increase 6.7 percent from this year to 548.8 trillion won next year.

Its national tax income is expected to rise 19.8 percent to 338.6 trillion won.

Revenue from comprehensive real estate holding tax was projected to jump around 30 percent from an estimated 5.1 trillion won this year to 6.6 trillion won next year. Corporate tax, value-added tax and general income tax have been expected to increase sharply on improved corporate earnings and consumer confidence.

The government will spend 20 trillion won next year for job and housing subsidy for youth. It also plans to expand state insurance coverage for platform-based gig workers and temporary workers.

The country will allocate 216.7 trillion won for healthcare, welfare and employment related assistance, up 8.5 percent from this year and surpassing 200 trillion for the first time.