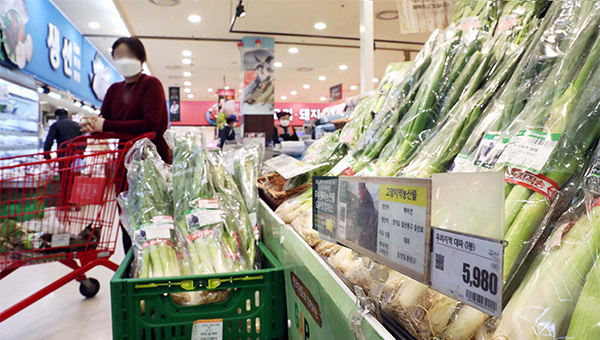 South Korea’s factory output kept up a marginal increase in July primarily on external demand as domestic demand slackened from the summer wave of Covid-19 that placed the country under de facto consumer lockdown.

According to data released by Statistics Korea on Tuesday, the seasonally adjusted mining and manufacturing output in July added 0.4 percent on month, easing from a 2.3 percent gain in June.

Factory operation averaged 74.1 percent, up 0.5 percentage point from a month ago. Inventory levels gained 1.8 percent on month but fell 3.2 percent on year.

Vehicle output and communications and broadcasting equipment output, however, declined 3.9 percent and 6.2 percent, respectively, in July.

Service industry output was up a mere 0.2 percent in July, easing from a 1.6 percent gain in June.

Wholesale and retail added 1.7 percent on the back of increased sales of food and groceries, entertainment and leisure items. Information and communications also gained 2.7 percent on increased security-related software demand and new game releases. Accommodation and restaurants fell 4.8 percent and arts, sports, and leisure 5.5 percent, on toughened social distancing rules.

Overall industry output fell 0.5 percent from a month ago on weaker public administration and construction output.

Against the pandemic-ridden year-ago period, output was up 4.7 percent.

The overall slowdown was due to the latest Covid-19 flare-up since July, but the country’s industrial activities stayed more resilient than feared. 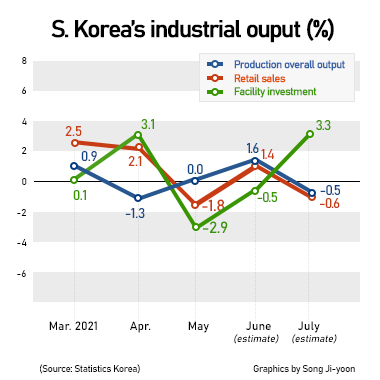 이미지 확대
On Facebook, Finance Minister Hong Nam-ki wrote Tuesday that the face-to-face service sector such as restaurant and accommodation was inevitably affected by the latest Covid-19 outbreaks but the declining pace was slower compared to the previous mass outbreak.

Public administration saw the biggest fall in over eight years with an 8.3 percent decline in July. Spending on vaccines was down from the previous month. Construction also fell for a fourth month in a row after April by 1.9 percent.

Retail sales declined for the first time in two months after a 1.8 percent fall in May.

Leading indicators were mixed, indicating lingering uncertainties in the economy due to the prolonged Covid-19 outbreaks.

The coincident index, which reflects current economic situations, inched up 0.1 point from the previous month to 101.3 in July, while the leading index, a gauge of where the economy is headed, fell 0.2 point to 102.6, snapping its 14-month-long gaining streak.