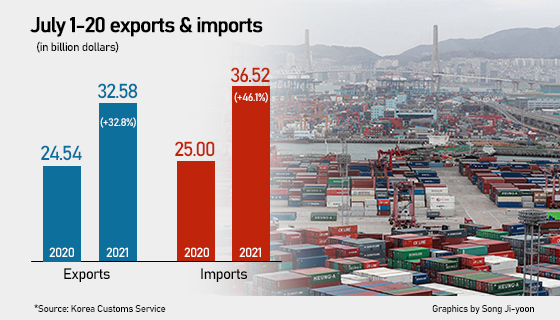 이미지 확대
South Korea’s exports in the first 20 days of July surged nearly 33 percent from the same period last year, keeping up sizzling pace after record shipments in the first half led by mainstay exports of chips, petrochemicals, vehicles, and IT devices.

According to the preliminary data released by Korea Customs Service on Wednesday, the country’s overseas shipments amounted to $32.6 billion from July 1-20, up 32.8 percent from last year. Daily exports also jumped 32.8 percent based on the same 15.5 working days a year ago.

Korea’s outbound shipments have kept up on-year growth of around 40 percent for the last three months.

By country, exports to the United States expanded 38.9 percent on year and those to China, the country’s largest trading partner, gained 18.6 percent.