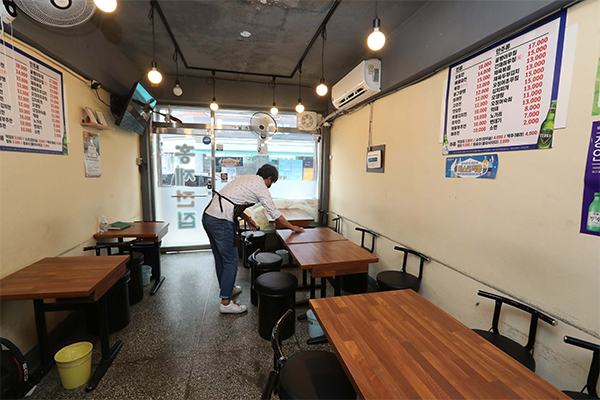 Small business owners in South Korea are being driven out of business as the country has gone into the toughest Level 4 antivirus restrictions amid a recent upsurge of Covid-19 infections.

According to the data released by the Korea Federation of SMEs (KBIZ) on Sunday, 57.3 percent of small business owners said they are considering shutting down their business permanently or temporarily as sales will likely plunge in the usual high season of summer months amid the strictest Level 4 measures imposed last week.

The survey was conducted from July 12 to 15 on 300 small businesses in the country—162 in the greater Seoul area and 138 in provincial areas.

Of the small business owners in the capital region surveyed, 67.3 percent responded that they expect their sales in July and August to fall more than 40 percent from their initial estimates under Level 4 rules. 42.8 percent of those in provincial regions responded that sales in the summer months would drop by 20 to 40 percent if stricter distancing rules are implemented, while 27.5 percent said sales will plunge more than 40 percent.

The summer holiday season is usually the busiest time of year for small business owners. Their monthly sales during July and August in 2019 reached 79.19 million won ($69,143.46) on average. However, when the second wave of the coronavirus battered the country in August last year, the figure nearly halved to 42.34 million won, and they expect to see a bigger dent in sales this summer.

A majority of the small business owners – 89.6 percent – blamed the fourth wave of Covid-19 for the plunge in sales.

The country’s capital Seoul and surrounding areas have been under the toughest social distancing rules Level 4 that include banning social gatherings of more than two people after 6 p.m. since July 12 for two weeks. Non-capital regions from Monday are also banned from gatherings of more than four until Aug. 1 amid spiking infection cases. Korea reported 1,454 new cases Sunday, the highest weekend infection rate since the first Covid-19 outbreak in the country.

By Lee Jong-hwa and Lee Soo-min