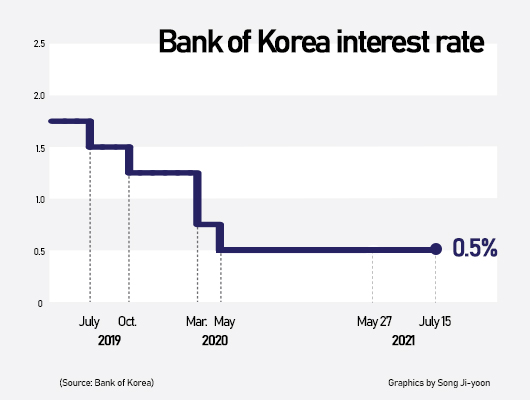 이미지 확대
South Korea’s central bank on Thursday reaffirmed its hawkish stance on monetary policy, citing the solid recovery and growing financial imbalances despite the country’s worst outbreak of Covid-19 that led the bank to hold the rate at the record low of 0.5 percent on the same day for more than a year.

“Almost every board member agreed that it was time to place out utmost priority in addressing financial imbalances,” Bank of Korea Governor Lee Ju-yeol said in a news conference held after the bank left the policy rate at 0.5 percent unchanged at a monetary policy meeting on Thursday morning, adding that board member Koh Seung-beom, out of the seven members at the central bank board, raised a dissenting voice, recommending a 25 basis point hike.

A dissenting vote is seen as an indication of a policy change in coming months.

Lee added “I think time has come to discuss and review whether it is appropriate to adjust accommodative policy easing in the next meeting” in August, hinting at a potential hike this year. The BOK has kept the rate at the record low at 0.5 percent since May 2020 after back-to-back cuts from 1.25 percent in March.

The Korean won ended at 1,142.00 against the U.S. dollar on Thursday, 7 won firmer than its previous close.

Lee cited the country’s still solid economic recovery backed by robust export and investment, as well as the government’s aggressive fiscal expansionary policy to shore up the economy as reasons for policy tightening.

The economy this year fared far better-than-expected on record exports in the first half, making authorities to set growth target to above 4.0 percent for this year.

“This year’s economic growth will stay at 4 percent level as projected in May,” he said.

The country’s exports reached record $303.24 billion in the first half by rising 24 percent, fastest in 11 years, with shipments surging by more than 40 percent on year for three straight months.

Lee expected the latest virus wave, which is the worst outbreak hitting the country, would slow the recovery in domestic consumption somewhat due to stricter social distancing rules but its negative impact on the overall recovery would be limited.

The BOK also raised this year’s inflation outlook to the 2 percent to mid-2 percent range, up from 1.8 percent projection in May. 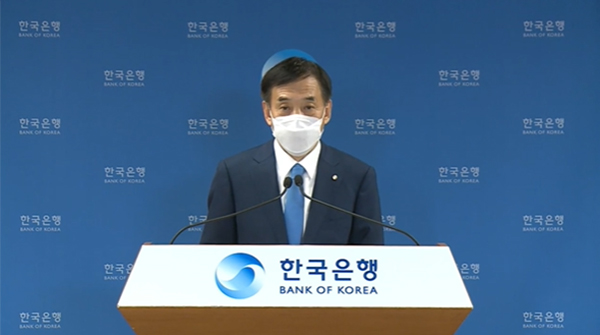 BOK Governor Lee alerting of a rate hike within the year in June suggested two hikes that would raise the base rate to 1.0 percent would still be considered “accommodative” to aid economic recovery, pushing the short-dated government bond yields jump higher to bet on a rate hike as early as this month.

But the summer wave of Covid-19 that has placed the capital region under most rigid-to-date mitigation rule of curbing grouping after 6 in the evening to two heads while two-shot inoculation rate remains at 10 percent would have tamed hawkish tone at the board.

The BOK on Thursday left the policy rate at the historic low of 0.5 percent due to the record outbreak of coronavirus cases and variant danger. The daily infections topped 1,600 cases for two days in a row as of Wednesday.

Until sharp resurgence in July, the governor gained enough reasoning for a rate action as the protracted low interest environment had pushed private sector debt to more than double the gross domestic product and fanned asset investment craze from housing to stocks and cryptocurrencies.

There are just three monetary policy meetings left for the year – in August, October and November with next meeting on Aug. 26.