Money supply in Korea up 0.6% in May, easing from record pace in April 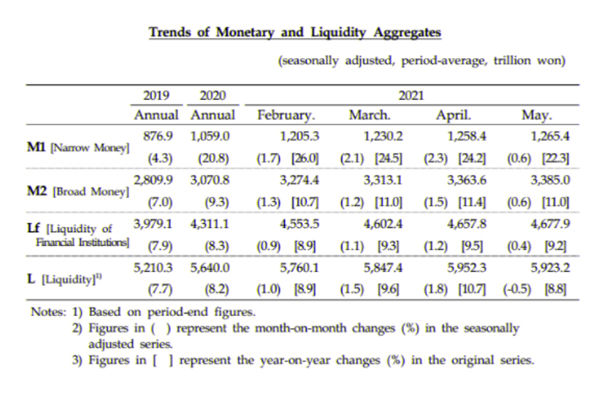 Money supply in South Korea extended its growth streak in May, although the pace slowed down from the previous month amid easing in frenzied asset investment.

The country’s M2 money supply reached 3,385 trillion won ($2.96 trillion) in May, up 0.6 percent from April, according to the data released by the Bank of Korea on Monday.

M2 is a broad measure that shows how much money is being circulated in the market. It includes all liquid assets, such as cash and checking deposits, as well as less liquid forms, such as savings deposits, money market securities and mutual funds.

이미지 확대
The on-month growth slowed down from the fastest record of 1.5 percent in the previous month, but M2 grew 11 percent against a year earlier in May, the data found.

Funds held by other financial institutions including brokerages gained 15.7 trillion won thanks to the booming stock trades, according to an official from the central bank.

Households and non-profit organizations added 6.7 trillion won and companies 4.1 trillion won amid increased borrowing for housing transactions and battle against the pandemic.