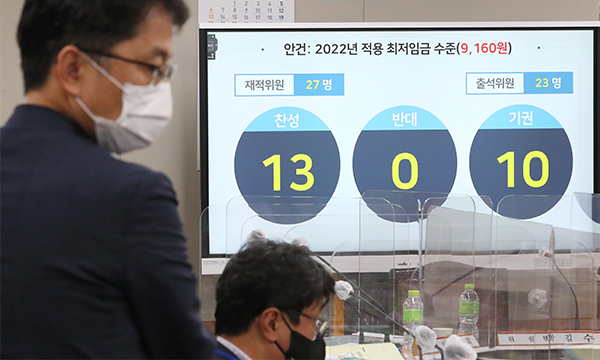 South Korea’s minimum wage rate per hour has been set at 9,160 won ($8.02) for next year, up 5.1 percent from this year in the third subdued gain after two double-digit hikes to fall short of President Moon Jae-in’s campaign promise to achieve 10,000 won hourly pay within his five-year term.

The public-sector commissioners mediated as the gap had been wide as the union umbrella group argued for a figure close to 10,000 won while employers demanded a freeze, citing tough business conditions under Covid-19. 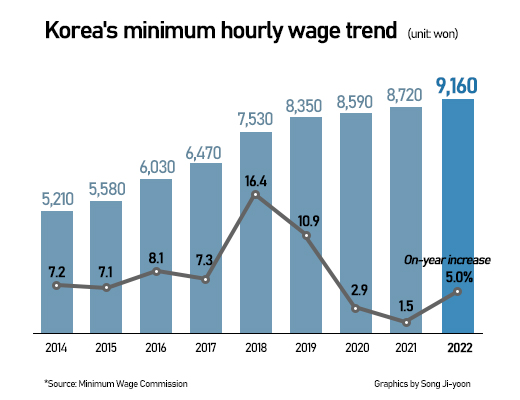 이미지 확대
The bump of 440 won would be 5.04 percent rise, but the commission and government agreed the official rate should be rounded up as 5.1 percent by adding up this year’s estimated annual economic growth of 4.0 percent and inflation of 1.8 percent and subtracting the 0.7 percent forecast for the annual gain in the number of payroll.

Under the Moon administration, minimum hourly wage jumped 16.4 percent in 2018 and 10.9 percent in 2019. The pace sharply was adjusted to 2.9 percent last year and slowest-ever 1.5 percent this year amid deterioration of the job and self-employed front.

Over the five years under Moon, the hourly rate rose a combined 41.6 percent, or 7.2 percent a year on average, which is actually lower than the 7.4 percent under the former Park Geun-hye government.

The labor minister must confirm the new statutory minimum wage by August 5 for effectuation from January 1. Employer and employee members can appeal and the labor ministry in theory can appeal to the commission for renegotiation.

By Kim Hee-rae and Lee Eun-joo