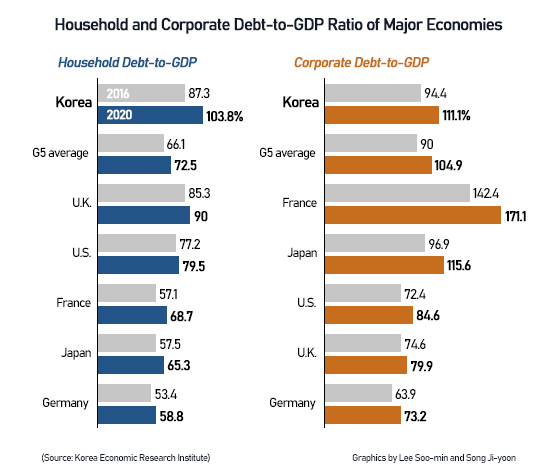 이미지 확대
Private-sector debt in South Korea has built up markedly faster than other countries, overwhelming the gross domestic product (GDP) to pose as a risk if rates move higher, a local think tank found.

According to a comparative study by the Korea Economic Research Institute (KERI) on Thursday, the country’s household debt-to-GDP ratio came to 103.8 percent as of the end of last year, rising 16.5 percentage points from 2016. During the same period, private debt gained 11.2 percentage points across the globe and 6.4 percentage points in the world’s top five economies, data from Bank for International Settlements (BIS) and the Organization for Economic Cooperation and Development (OECD) showed.

At the same time, Korean households’ ability to meet debt obligation has sharply deteriorated because they had added debt faster than income.

As of May, outstanding balance of household debt stood at 1024.1 trillion won ($918.8 billion), down 1.6 trillion won against the previous month, according to data from the Bank of Korea on Thursday. The household debt fell for the first time since January 2014.

Korean companies’ ability to repay debts was better than households. Their DSR came to 39.7 percent as of the end of last year, rising 3.7 percentage points in the past five years, while the G5 countries saw their DSR grow 6.6 percentage points to 42.7 percent during the same period.

KERI pointed out a rash tightening without giving the private-sector time to streamline their debt load could translate into a financial risk.