Korea adds more than 600,000 jobs in May, keeping growth for 3rd month

The number of people with jobs in South Korea increased by more than 600,000 for the second consecutive month in May from the previous year as the economy is showing signs of recovery from the Covid-19 impact.

The number the employed reached 27.55 million in May, up 619,000 from the same month a year earlier, according to the data released by Statistics Korea on Wednesday. The number maintained its uptick trend for three months in a row since March when it had marked the first growth in 12 months.

The seasonally adjusted number of workers in May also gained 101,000 compared to a month ago.

“The number of the employed grew by 828,000 over the past four months as the figure showed on-month gains over the period, meaning that the country added more than 200,000 jobs on average per month,” said Hong Nam-ki, the country’s finance minister and deputy prime minister for economy. “That means the job market has returned to 80 percent of the pre-pandemic level in February 2020.”

The employment rate for people aged 15 or over edged up 1 percentage point to 61.2 percent, with that for young adults aged between 15 and 29 rising at the fastest pace since 2005 at 44.4 percent. 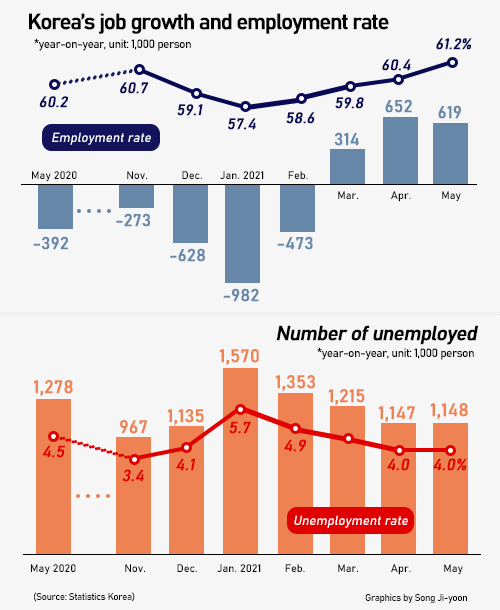 The wholesale and retail industry, on the other hand, lost 136,000 jobs, with individual service sector reporting a loss of 45,000 jobs and arts, sports and leisure service segment 39,000 jobs.

The hospitality and restaurant industry, hit hard by Covid-19, gained 4,000 jobs in May, keeping the growth momentum for two straight months.

The number of the unemployed fell 130,000 from a year ago to 11.48 million in May, marking a decline for two months in a row and the fastest drop since February 2020.

The jobless rate went down 0.5 percentage point on year to 4 percent in May. The number of jobless people aged between 15 and 29 dropped 24,000 from last year.

The number of non-economically active population decreased for the third consecutive month to 16.35 million. The number of job seekers rose 69,000 to 890,000.