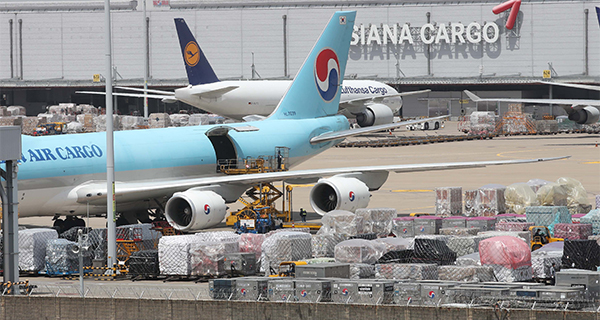 Shipping rates via both sea and air have hit all-time highs in May, a boon for the carriers, but a dismay for smaller exporters in Korea as they could miss out on the global commerce windfall in the wake of pandemic crisis.

After softening to $5.48 in March, the rates continued rally throughout the second quarter.

Low-cost carriers focused more on passenger carrier business saw their cargo volume remain at 30 percent of the pre-Covid-19 level. LCCs that do not own cargo planes have been carrying products at valley cargo space inside passenger carriers. But both passenger and cargo business remained sluggish with international flights being suspended due to Covid-19.

The Shanghai Containerized Freight Index (SCFI) a widely cited metric on market freight quotation, rose 117.31 points to 3,613.07 on Friday from a week earlier. It is not only the highest since related data started compiling in October 2009 but nearly quadruple that of 925.50 on the same day last year.

The spike in shipping rates hardens small- and mid-size enterprises who can only afford to sign short-term contracts for cargo transportation on top of higher fuel charges.

Korean Air hiked fuel surcharges for international cargo from 0 in January and February to 100 won ($0.09) per kilogram from March to reflect higher international oil prices.

The Korean government on Monday pledged 20 billion won in special loan program to small and mid-size exporters to help their shipping conundrum.