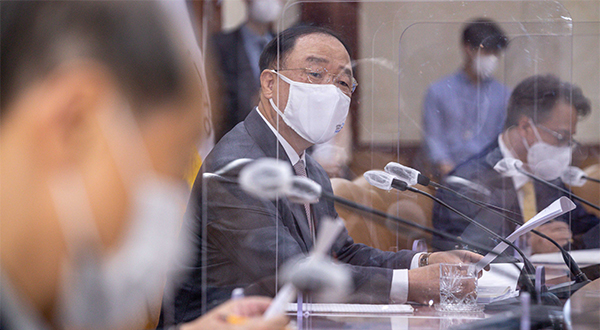 The South Korean government Friday formerly confirmed it is working to package the second supplementary budget as it needs not have to issue debt to finance the extra stimuli thanks to excess tax income.

“The review on another extra budget will focus on vaccine program and relief for merchants suffering from virus fallout as well as promoting jobs,” said deputy prime minister and finance minister Hong Nam-ki during a meeting with heads of the country’s major economic research institutions and investment banks on Friday before outlining the financial policy for the second half.

The government would not need to issue extra debts as it had to finance the first supplementary budget in March due to greater-than-expected tax revenue, he said.

이미지 확대
Tax revenue increased 19 trillion won ($17 billion) against a year-ago period in the first quarter and is expected to exceed government estimate by 17 trillion won for full year.

The government hopes to achieve 4.0 percent growth this year after 1.0 percent contraction in 2020 through stimuli actions. “Preemptive response is important so that inflation, household debt, over-concentration of real estate and asset, and external uncertainties do not hamper with recovery,” he said.