S. Korea’s FX reserves climb to another new high in May on weaker greenback 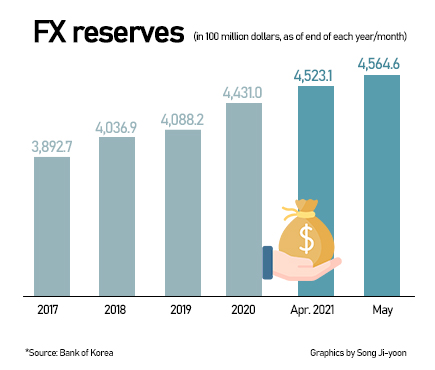 이미지 확대
South Korea’s foreign exchange reserve hit a fresh historic high of $456.46 billion at the end of May, extending the record-breaking streak to a second straight month on the weakening U.S. dollar.

The foreign exchange reserves held by the Bank of Korea stood at $456.46 billion as of end-May, adding $4.15 billion from the previous record-high amount of $452.31 billion in April, according to the central bank on Thursday.

The central bank attributed the gain in forex coffers to the weaker U.S. dollar that pushed up the value of non-dollar assets. Deposits in foreign currencies and investment returns also increased, it added.

Securities, which accounted for 90.7 percent of the FX reserves, came to $414 billion, gaining $1.98 billion on month.

Deposits climbed $2.21 billion from a month prior to $29.44 billion and the special drawing rights from the International Monetary Fund (IMF) added $20 million to $3.54 billion. The reserve position, or portion of required quota of currency held with the IMF that can be withdrawn fell $60 million to $4.64 billion.

As of the end of May, South Korea was the world’s eighth largest holder of foreign exchange reserves. China ranked top with $3.19 trillion, followed by Japan at $1.37 trillion and Switzerland at $1.07 trillion.