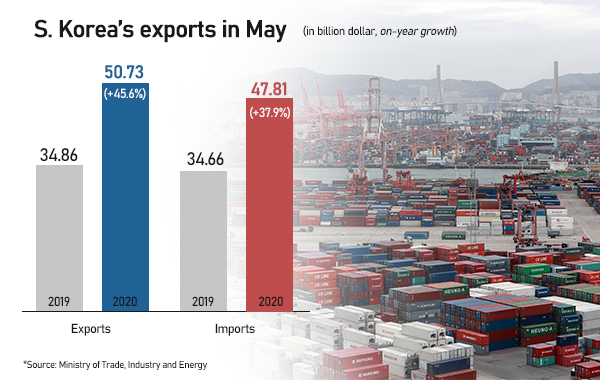 South Korean exports surged by the raging pace of 46 percent in May, a double-digit monthly gain unseen since August 1988, as mainstay chips, automobiles and petrochemicals rode on faster-than-expected recovery in the global economy amid vaccination progress.

According to data released by the Ministry of Trade, Industry and Energy on Tuesday, the country’s outbound shipments totaled $50.73 billion in May – a monthly record and up 45.6 percent on year or the strongest since August 1988.

Exports have been strengthening for the seventh month in a row and soaring over 40 percent for two straight months for the first time. Exports had gained 41.2 percent in April.

The staggering exports were led by mainstay export items including semiconductors and automobiles. Of the 15 key export items, 12 showed double-digit growth.

Semiconductor shipments jumped 24.5 percent in May from a year ago, extending gain for an eleventh straight month, and topping $10 billion for the first time since 2018.

Vessel exports fell in May, although the drop is less related to this year’s bulging order book as they are based on orders from two to three years ago.