South Korea’s ruling Democratic Party’s proposal for a second extra budget this year is gaining momentum as the government is forecast to collect $15 billion more than expected in tax revenue this year thanks to the hot asset market and stronger-than-expected economic rebound.

The government`s tax revenue estimate for this year had been conservative as the budget was drawn up during the peak of Covid-19 havoc in summer last year. 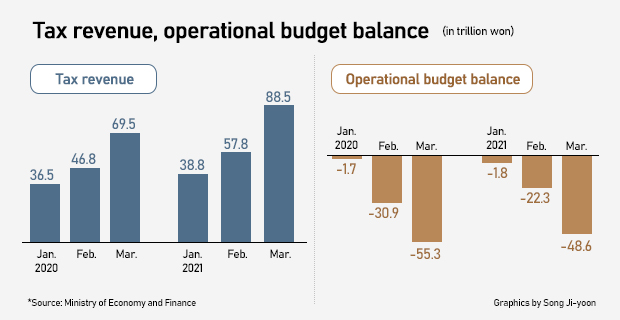 이미지 확대
Tax revenue growth started to pick up from the latter half of last year, helping the government collect 285.5 trillion won in taxes last year, 5.8 trillion won more than the earlier estimate of 279.7 trillion won.

The estimated 17 trillion won addition in tax revenue can help back government rationale for extra budget if necessary as it does not have to issue debt. The government has already created 14.9 trillion won in supplementary budget in March.

First Vice Finance Minister Lee Eog-weon also hinted at additional extra budget for this year, saying in a briefing last week that the government plans to comprehensively review the need for an additional fiscal boost in the second half after taking account of tax revenue conditions.