According to data released by Statistics Korea on Monday, the seasonally adjusted mining and manufacturing output in April fell 1.6 percent from a month ago on weaker chip output that had fueled shipments for export-reliant economy.

Manufacturing output fell 1.7 percent in April from a month ago on reduced semiconductor, rubber, and plastic production. Factory operation averaged 73.8 percent in April, down 1.1 percentage points from the previous month. Inventory levels also fell 0.1 percent on month and 4.2 percent on year.

Semiconductor output shriveled 10.9 percent – the sharpest drop since 14.7 percent in April last year – against a record high in the previous month.

Rubber and plastic output fell 4 percent in April from a month ago due to a decline in production of plastic case for electronic devices. Production of machinery equipment, telecommunications and broadcasting equipment, and electronics equipment gained in April. 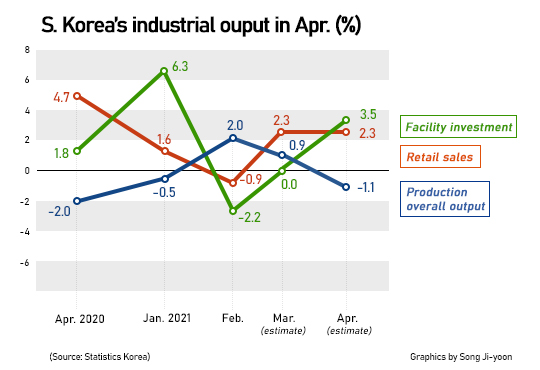 Industrial output had gained 2.0 percent in February and 0.9 percent in March before reversing its direction in April.

Service output added 0.4 percent from a month ago in April, strengthening for the third month in a row after a 1.1-percent gain in February and 1.3-percent gain in March.

Wholesale and retail added 0.8 percent on the back of increased spending on apparels, cosmetics, and food and grocery items. Accommodation and restaurants also gained 3.1 percent amid eased social distancing rules.

Retail sales grew 2.3 percent in April from the previous month to a record reading of 120.5.

Facility investment added 3.5 percent in April from a month earlier.

The cyclical component of composite coincident index, which reflects current economic situations, gained 1.1 points from the previous month to 101.3 in April.

The cyclical component of composite leading index, which predicts the turning point in business cycle, increased 0.4 point on month to 103.6. The index gained for 11 straight months, the longest streak since 12 months from February 2009 to January 2010, data showed.