이미지 확대
Private debt surged by record levels of around $189 billion in South Korea last year amid Covid-19 pandemic and frenzied chase after housing and stocks from cheap liquidity.

According to the data released by the Bank of Korea (BOK) on Thursday, the nation’s outstanding household debt extended by banks totaled 988.8 trillion won ($896.9 billion) as of the end of December last year, up 100.5 trillion won from a year ago.

The on-year growth is the largest since the central bank began compiling related data in 2004.

The gain in mortgage-backed lending is the second largest since 2015, and that in other loans the largest-ever since the data became available in 2004. 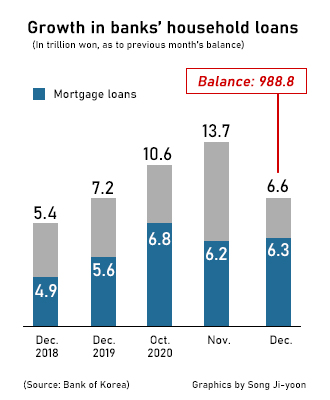 이미지 확대
The central bank said the household loans ballooned last year due to the increased housing transactions as well as deteriorated financial condition amid Covid-19. The growth was also led by rising demand for stock investment funds.

In December alone, household debt grew 6.6 trillion won from the previous month. The growth slowed down compared to a 13.7 trillion won on-month increase in November, due to the plunge in monthly gain in other loans.

Banks’ won-denominated corporate loans stood at 976.4 trillion won as of late 2020, up 107.4 trillion won from a year ago. It also marks the sharpest on-year growth since related data became available in 2009.