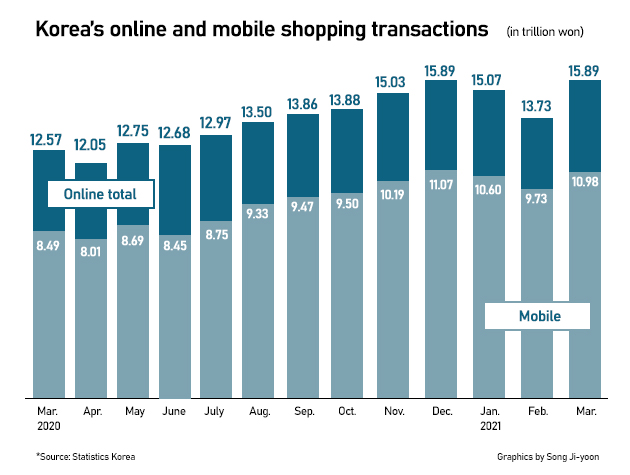 이미지 확대
Direct overseas purchase by South Koreans surged 44 percent to record high of around $1 billion in the first quarter as online shopping kept up double-digit growth pace in the country still under the influence of Covid-19.

According to the data from Statistics Korea released on Thursday, the value of online shopping transactions in March climbed 26.4 percent on year to 15.89 trillion won ($14.11 billion), marking the steepest on-year rise since October 2018 when it jumped 30.7 percent.

Online shopping has grown in all product categories. Travel services saw the biggest growth in sales of 92.9 percent on revived domestic travel activities thanks to eased virus curbs, followed by food deliveries and home appliances which jumped 62.4 percent and 22 percent, respectively. Travel and fashion industries swung back to growth for the first time in 13 months.

Mobile shopping, which accounted for 69.1 percent of the total volume of online shopping, reached 10.98 trillion won in March, adding 29.4 percent from a year ago.

Online shopping transactions in the first quarter increased 21.3 percent on year to 44.69 trillion won, 31.31 trillion won of which was made via mobile platforms.

Overseas direct purchases soared 44.2 percent on year to 1.41 trillion won, the highest since record was kept from 2014. Direct buying from China surged a whopping 223.6 percent to 457.8 billion won.

In contrast, direct sales of Korean goods via online channels in the first quarter dipped 23 percent to 1.17 trillion won, owing to the sharp decline of tourists. Sales at online duty-free shops plunged 25.1 percent against a year-ago period to 972.4 billion won.