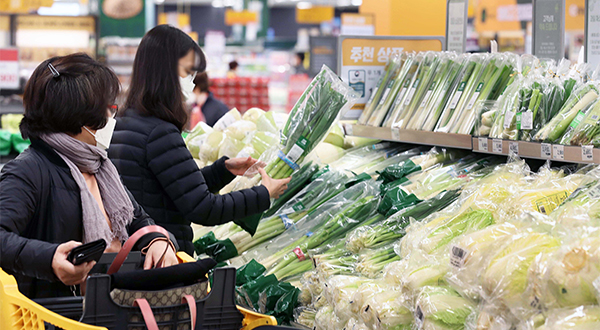 South Korea’s headline inflation accelerated by the fastest pace in nearly four years to hit beyond the 2.0 percent mid to long-term target on the spike in commodity and fresh food prices that spilled over to factory and grocery prices, putting more pressure on authorities to tighten monetary policy.

According to Statistics Korea on Tuesday, the country’s consumer price index (CPI) added 2.3 percent from a year ago to 107.39 in April in the strongest gain since 2.5 percent in August 2017.

The index had stayed far below 2 percent since November 2018, dipping to minus 0.3 percent in May and hovering around zero most of last year. Soaring prices of agricultural goods and international crude pushed up the headline CP this year with the pace accelerated from 1.1 percent in February and 1.5 percent in March to 2.3 percent in April.

The sharp rise was mainly led by a 13.1 percent on-year jump in agricultural, livestock and fishery product prices, stretching double digits for the fourth month in a row.

Prices of agricultural goods surged 17.9 percent in April from a year ago, with prices of green onions soaring 270 percent due to poor growth. The gain was weaker than 305.8 percent in the previous month. Prices of apples jumped 51.5 percent, chili powder 35.3 percent, and rice 13.2 percent, data showed.

Prices of service gained 1.3 percent, with individual service price up 2.2 percent. Dining costs rose at the sharpest pace since June 2019 at 1.9 percent. 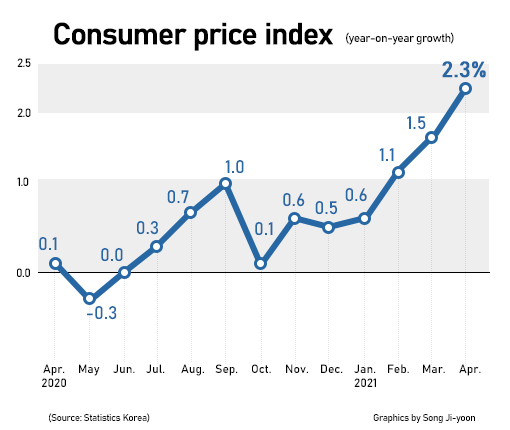 “Upward pressure was led by rising international oil prices and economic sentiment,” said Eo Woon-sun, a senior official at Statistics Korea. “The trend is most likely to continue throughout the second quarter, given the (low) base effect in year-ago period.”

The price growth of agricultural, livestock and fishery product prices is easing, and strengthening in the international crude won’t likely stretch into the second half, Eo said.

Still, faster-than-expected inflationary buildup is expected to complicate the monetary authority’s promise to keep the rate policy accommodative of the domestic demand still fragile from ongoing Covid-19 and mindful of the impact on the colossal household debt.

The Bank of Korea has kept key interest rate unchanged a record low of 0.5 percent since May last year. The next rate-setting meeting is on May 27.