S. Korea’s factory output down 0.8% in March, but consumption improves

South Korea’s factory output fell in March on reduced manufacturing of automobiles and machinery equipment partly due to a shortage of automotive chips, but overall industry activity extended growth for the second month in a row thanks to the robust service sector and a recovery in consumption.

According to data released by Statistics Korea on Friday, the seasonally adjusted mining and manufacturing output in March fell 0.8 percent from a month ago on sluggish production of vehicles and machinery equipment amid the global shortage of automotive chips. From a year earlier, it gained 4.7 percent.

Statistics Korea noted that factory activity softened in March after it jumped by an all-time high of 4.4 percent in the previous month. Some local auto manufacturers were also forced to suspend production due to the world-wide automotive chip supply issues.

Automotive output fell 4.8 percent and machinery equipment 3.0 percent, but they were mitigated by a 4.3-percent gain in semiconductors such as DRAM and flash memory chips. 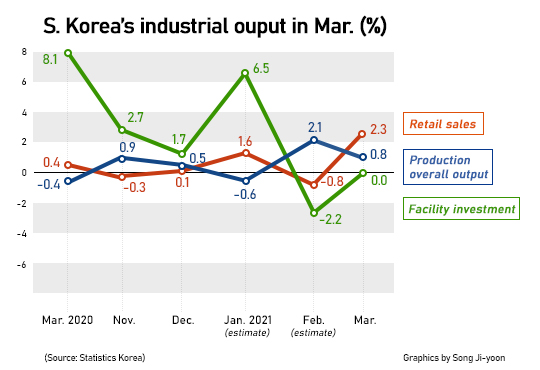 이미지 확대
Overall industrial output including services activity in March added 0.8 percent to 112.6 from the previous month, strengthening for two straight months after a 2.1 percent gain in February.

Service output grew 1.2 percent from a month ago – the highest since 1.8 percent in June 2020. Accommodation and restaurants grew 8.1 percent amid eased social distancing rules.

Retail sales grew 2.3 percent in March from the previous month, turning around from a 0.8 percent fall in the previous month. It was the largest gain since 3 percent in August 2020. Department store sales, in particular, increased 3.7 percent on month and 61 percent on year in March as consumers headed out after more than a year of stay-at-home trend due to Covid-19.

The cyclical component of composite coincident index, which reflects current economic situations, increased 0.5 point from the previous month to 100.2.

The cyclical component of composite leading index, which predicts the turning point in business cycle, increased 0.2 point on month to 103.1.