The ratings agency also maintained its A-1+ short-term sovereign credit rating on Korea.

“The stable outlook reflects our expectation that the Korean economy will continue to exhibit stronger growth than most other high-income economies and that will help its fiscal repair process,” S&P said in a statement released Wednesday.

“While the Korean economy contracted (last year) for the first time since 1998, growth is back on track, and the decline was less than that of most other high-income economies hit by Covid-19,” it emphasized.

S&P noted that the Korean economy in a good condition will register average real GDP per capital growth of just below 3 percent annually in 2021-2024. Over the period, per capita GDP is estimated to rise above $42,000 from below $36,000 currently. 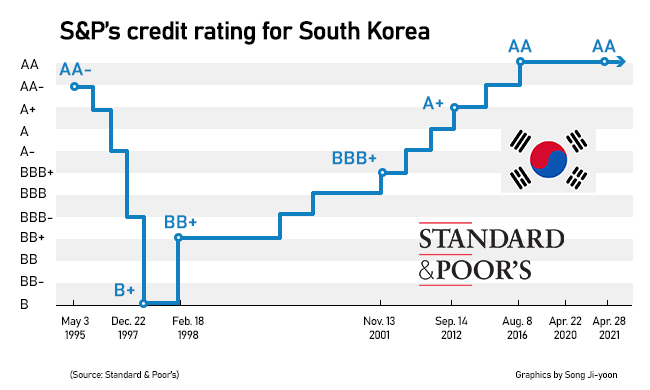 이미지 확대
The agency found Korea’s relative success in controlling the spread of the pandemic has helped limit the decline in domestic consumer demand. The country’s competitive manufacturers have also benefited from strong global demand for their products and increased investment spending through 2020, it added.

It advised Korea come up with measures against the ageing society to keep the country’s productivity high.

“We believe that the country’s long-term growth prospects remain strong despite the disruptions caused by the pandemic,” S&P said, but warned that “Potential external security threats posed by North Korea continue to weigh on our otherwise strong institutional assessment of Korea.”

Geopolitical risks on the Korean peninsula, however, “will not escalate to the point of hurting Korea’s economic fundamentals,” S&P highlighted.

S&P has kept Korea’s sovereign rating unchanged after upping it to AA from AA- in August 2016.