(Updated with details and comments)

The country’s gross domestic product (GDP) increased 1.6 percent, extending the on-quarter growth streak of 1.2 percent in the fourth quarter and 2.1 percent in the third after back-to-back contraction in the earlier half of Covid-19 year of 2020, according to a preliminary data announced by the Bank of Korea on Tuesday. The GDP grew 1.8 percent on year in the first quarter.

The markets responded lukewarmly to the better-than-expected scorecard. The benchmark Kospi closed Tuesday down 0.07 percent at 3,215.42. The Korean won finished up 0.25 percent at 1,110.4 against the U.S. dollar. 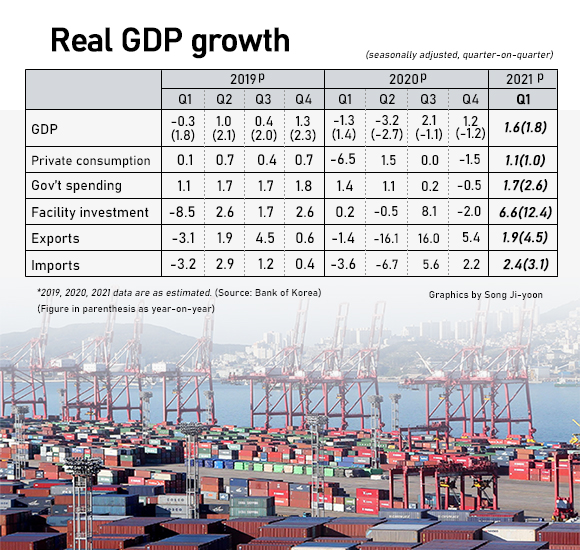 이미지 확대
The government was buoyant.

Since the GDP contracted 1.0 percent last year under the Covid-19 hammer, Korea would be returning to average growth rate of 2.0 to 3.2 percent over the previous three years when counting out the base effect.

The Korean government will release the revised economic growth forecast and the second-half policy direction in June.