이미지 확대
The annual count in the unemployed fell for the first in 11 years and by the steepest in 22 years as the pandemic took toll on jobs and overall economy as much as the past global financial crises.

The number of employees for the year totaled 26.9 million, down 218,000 from a year ago, Statistics Korea reported Wednesday. Korea last has seen annual payroll fall in 2009 in the wake of 2008 crisis. The dip is the biggest since 1998 after the country went under massive layoffs and restructuring in return of international bailout after the 1997 Asian financial crisis.

The only other years Korea saw a payroll decline was during the 1984 oil crisis and the 2003 credit card bubble burst.

The Korean economy lost 628,000 jobs in December from a year earlier, the sharpest drop since February 1999 when it had 658,000 fewer jobs. This marks its 10th straight month of job decline, which has continued since the beginning of the Covid-19 outbreak. This is the longest losing streak since 1998-1999 when job losses extended for 16 consecutive months. 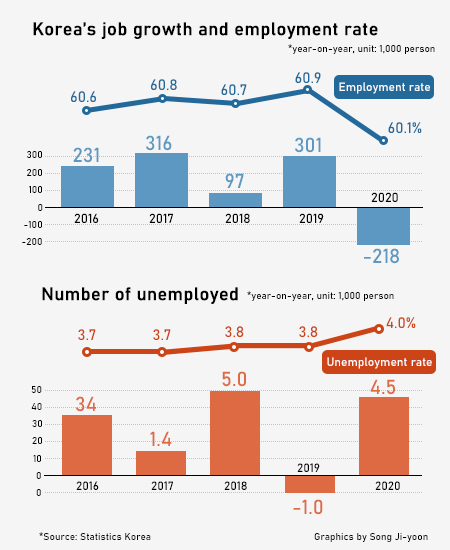 The unemployment rate gained 0.2 percentage point to 4.0 percent, the highest since 2001.

The employment rate fell 0.8 percentage point to an eight-year low of 60.1 percent.

“In-person services like accommodation, retail and wholesale, and education were hit the hardest,” said Chung Dong-wook of Statistics Korea. “Employment this year will also be affected heavily by infection trends.”

After weeks of hitting record daily tallies of above 1,000, the number of new cases has stabilized to around 500 in recent days.