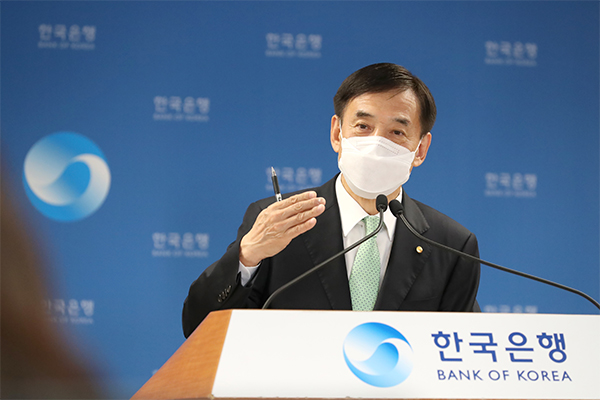 South Korea’s central bank on Thursday chose to hold its policy rate at a record low of 0.50 percent unchanged since May last year despite alarming rise in private-sector debt and inflationary pressure as unfazed Covid-19 wave raises uncertainties for the fragile domestic economic front.

“Some argue the rates should go higher given strengthening in the global economy, faster inflation and deepening imbalance in the financial sector, but uncertainties are still too great from (accelerated) Covid-19 spread and (slow) vaccination progress,” Bank of Korea chief Lee Ju-yeol said a video press conference after chairing the monetary policy meeting that sat tightly on the rate on the historic low last cut in May last year.

“We cannot say the economy is safely on a recovery pace. At this stage, it is too early to consider shifting the monetary policy,” he added.

Still, the BOK estimates the economic growth this year on the back of last year’s 1.0 percent contraction could be at least 3.5 percent, higher than its February forecast of 3.0 percent, due to faster-than-expected recovery in major export markets like the United States, China and Europe.

Exports have improved over the past months, picking up in double-digit numbers mainly led by robust shipments of the country’s mainstay items like semiconductors and automobiles but consumption is suppressed as Covid-19 outbreak shows no signs of easing while the country remains as one of the slowest in vaccine program in the developed category. 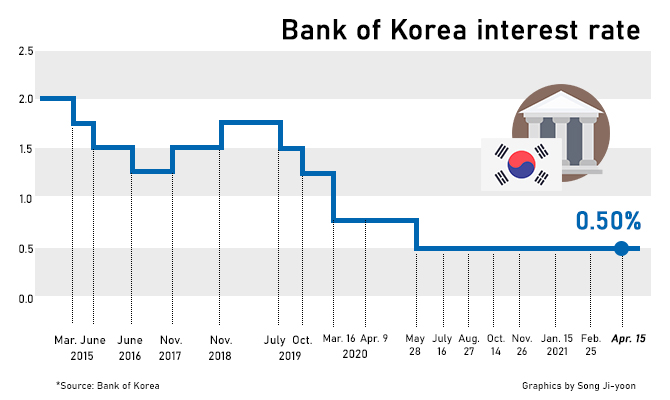 이미지 확대
According to Korea Customs Service, Korea’s shipments in the first 10 days of April jumped 24.8 percent on year to $2.99 billion, raising expectations for a sixth straight month of growth.

Inflation has been building up to pre-Covid-19 levels on spike in international commodity and domestic food prices. The bank projected inflation to accelerate from 1.3 percent in February and hover around 2 percent for awhile before coming down.

Lee also admitted policy board members were concerned about the imbalance in the financial sector – referring to the uninterrupted growth in household debt.

His comment about higher growth and debt concerns slightly raised expectations for a rate hike possibly in the second half.

Household debt with banks reached 1,009 trillion won as of end of March, up 6.5 trillion won from the end of February. It is the largest gain for March after 9.6 trillion won increase last year, BOK data showed. Private-sector debt by the end of 2020 had overwhelmed the nominal gross domestic product by 215.5 percent.