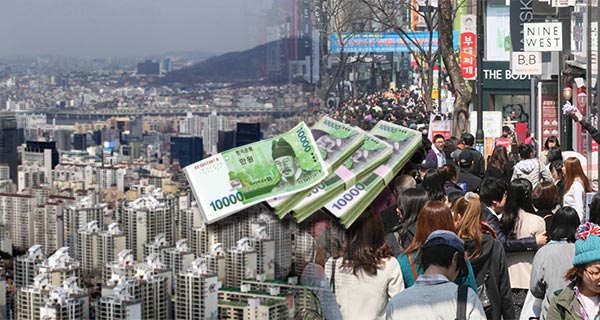 이미지 확대
South Korea’s average monthly household spending has declined for three years in a row under the Moon Jae-in government whose main economic agenda was led by income-led growth policy to spur household income and spending to spur growth.

Households spent an average of 2.4 million won ($2,150) per month last year, down 2.3 percent from a year ago, according to the data released by Statistics Korea on Thursday. The real household spending that excludes price fluctuations fell 2.8 percent from the previous year.

It marks a third-year decline following 2,457,000 won in 2019 and 2,538,000 won in 2018. The coronavirus pandemic and social distancing hurt private consumption last year, but the overall decline trend of household spending was unstoppable despite the government’s back-to-back cash support.

By consumption item, average monthly expenditures on food and non-alcoholic beverages were up by 14.6 percent last year while spending on entertainment, culture and education were down sharply hit by social distancing rules.