이미지 확대
Higher shipping rates have bumped up South Korea’s surplus in the current account in February and extended a black streak into the 10th month.

The country’s current account registered a surplus of $8.03 billion in February, $1.6 billion added from a year earlier, according to the preliminary data released by the Bank of Korea on Wednesday.

It is the 10th month in a row for the current account to stay in the black.

Service account reversed to a surplus of $130 million from a $610 million deficit in the previous month. A year earlier, it recorded $1.44 billion in the red.

The turnaround owed much to the rise in global shipping charges. Transportation account surplus amounted to $810 million.

The deficit in travel account narrowed to $340 million from $470 million posted a year earlier, with the number of Koreans traveling overseas sinking 93.5 percent on year. 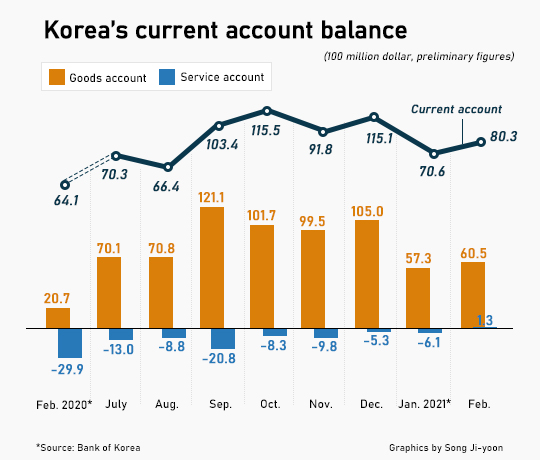