이미지 확대
The number of self-employed owing multiple financial lenders jumped 55 percent over the past year as they bore the biggest burn from Covid-19 crisis that has put household debt load twice bigger than South Korea’s gross domestic product.

According to data from NICE Information Service, a local credit information provider, disclosed by Rep. Yun Chang-hyun of the People Power Party on Sunday, the number of self-employed indebted to three or more financial institutions reached 199,850 as of the end of last year, more than doubling from 92,792 in the end of 2017. The number jumped from 128,799 a year ago.

It would mean one out of every 10 self-employed borrowed from more than three institutions. Of 557 trillion won debt extended to self-employed, 23.2 percent went to multiple borrowers.

The value would go up shaper when mortgage and credit loans are included.

According to data from the Bank of Korea, loans extended to self-employed – including personal financing and household loans – are estimated to amount to 803.5 trillion won last year. 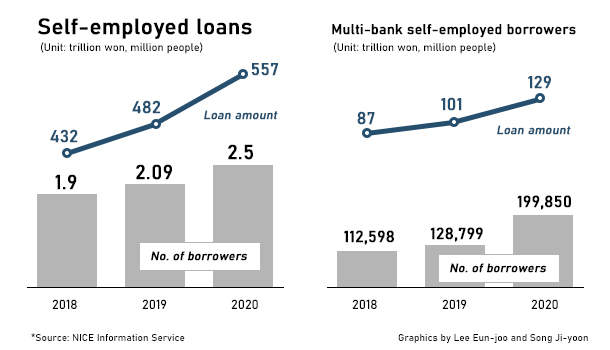 이미지 확대
Their heavy debt could translate into a risk not just for their business but the financial sector.

More than 90 percent of 1,545 self-employed reported their sales halved after Covid-19, and more than eight out of 10 admitted to an increase of 51.32 million won debt on average, a recent data showed.

Nearly half of multi-indebted self-employed workers are in their 50s and 60s with less ability to repay the debt due to decreased asset and income.

According to Seoul Bankruptcy Court, more than seven out of every 10 personal bankruptcy applicants were aged over 50. 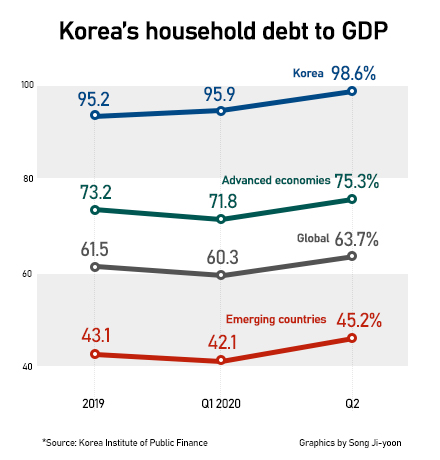 이미지 확대
Household debt versus GDP reached 97 percent as of June last year, overwhelming the global average of 63.7 percent and 75.3 percent of advanced countries, according to data from the Korea Institute of Public Finance.

The rapid rise in interest rates could lead to increased interest burden on many households and shock to overall economy, it warned.

By Lee Sae-ha and Lee Eun-joo