이미지 확대
South Korea’s exports in March topped $50 billion for the first time this year, which was also a record high for the month, thanks to a recovery in global demand for memory chips and the country’s other mainstay items.

The country’s exports totaled at $53.83 billion in March, up 16.6 percent from a year earlier, according to the Ministry of Trade, Industry and Energy data released on Thursday.

It was the fifth straight month of gain, and the monthly growth pace was the fastest in two years and five months.

Daily experts averaged at $2.24 billion, up 16.6 percent on year. It was the sixth consecutive month of gain. The last time the average daily export figure rose for six months straight was three years ago.

Exports expanded across the board.

Semiconductor exports amounted to $9.51 billion, the highest in two years and four months. Auto shipments totaled at $4.4 billion, the best in four years and three months. 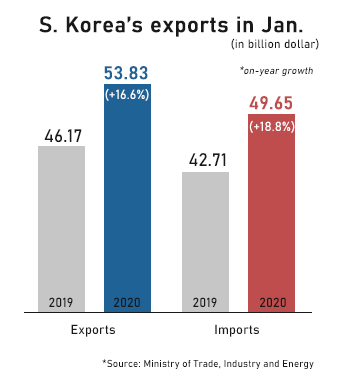 이미지 확대
Petrochemical exports hit a record high of $4.75 billion with an on-year jump of 48.5 percent.

Korea’s exports to four major trade markets all expanded. Exports to China increased 26.0 percent, to the United States 9.2 percent, to the European Union 36.6 percent, and to other Asian countries 10.8 percent. Exports to the EU was the best on record, and to the U.S the second highest ever.

It posted a trade surplus of $4.17 billion, extending the winning streak to 11 months.

Total trade amount, combination of exports and imports, reached $103.5 billion in March, topping the $100 billion mark for the first time.