According to the Statistics Korea on Wednesday, the seasonally adjusted mining and manufacturing output in February grew 4.3 percent from a month earlier, the biggest monthly gain since June 2020. Against a year earlier, it was up 0.9 percent.

The data had mild impact on the markets.

Overall industrial output including service sector but excluding agriculture, fishery and forestry rose 2.1 percent on month, the fastest addition since June 2020. The index reached 111.6, the highest since data tracking began in January 2000 and coming above 111.5 recorded in December 2019 or before the Covid-19 crisis.

Retail sales, a barometer for private consumption, however, retreated 0.8 percent. It is the first monthly decline since November last year and the biggest loss in seven months.

Spending at department stores shot up 12.1 percent and at specialty retailers 7.4 percent, benefiting from pent-up consumer demand for luxury goods. Sales at hypermarkets plummeted 10.1 percent and at grocery stores 6.8 percent on weakened spending for food and other household items. 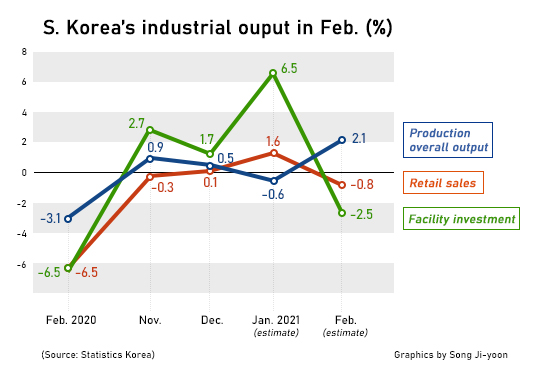 The coincident index, reflecting current economic activities, gained 0.3 point compared to January. The leading indicator, showing where the economy is headed, rose 0.2 point and extended the gaining streak to the ninth month. It is the longest run of gains since February 2009-January 2010.

According to a separate data from the Bank of Korea, the business sentiment index (BSI) for March added 7 points on month to 83, the highest since July 2011.

The index for manufacturers gained 6 points to 91, the highest since August 2011. That of non-manufactures was 78, up 5 points and the best since July 2018.

The economic sentiment index (ESI), which combines business confidence level and consumer sentiment index, reached 101.3, up 4.7 points on month. The last time the ESI broke above 100 was June 2018.

A reading above 100 means more business and consumer are optimistic than pessimistic, whereas a figure below 100 means the opposite.