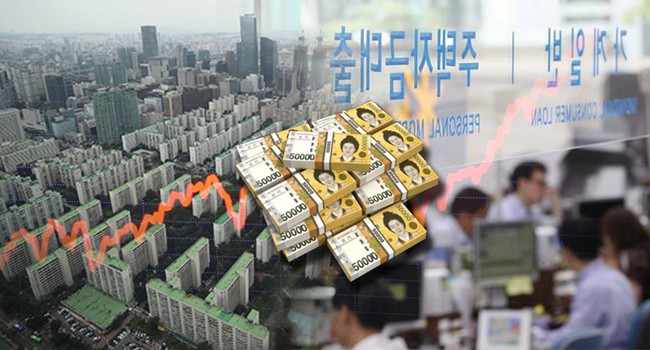 이미지 확대
South Korea’s private sector debt has come to overwhelm the country’s gross domestic product (GDP) by more than two times as of December as households and companies heavily relied on loans to survive the Covid-19 hardships and invest in the hot asset market, data from the central bank showed.

According to the Bank of Korea on Thursday, the country’s private sector debt against nominal GDP is estimated to have reached 215.5 percent at the end of 2020, up 18.4 percent from the end of 2019.

The ratio is the highest since the central bank began collecting related data in 1975. The year-on-year growth is also the fastest-ever on record.

The BOK noted that household borrowings from banks grew faster than the previous year and loans from non-banking institutions began to rise in the latter half of last year. Mortgage-backed borrowings increased sharply amid growing housing transactions and other loans such as credit loans also soared as consumers rushed to borrow before the tougher loan regulation and finance their stock investment.

Real estate exposure is measured by combining credit loans extended to households and real estate related companies and amount of money injected to real estate investment products. The ratio of real estate finance exposure against GDP soared 10.7 percentage points to 118.4 percent, reaching the highest since the data became available in 2010.