S. Korea’s FX reserves at new high in Feb after dip in Jan 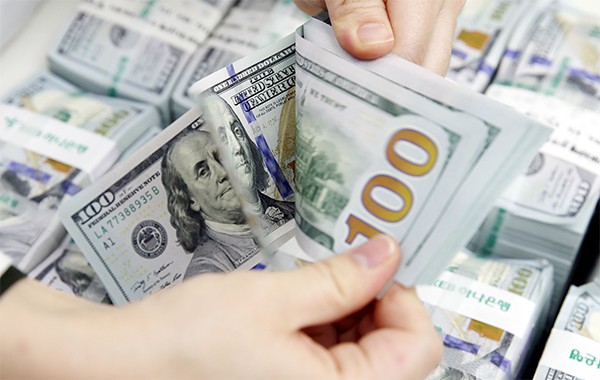 According to the Bank of Korea on Thursday, the outstanding balance of foreign currency deposits stood at $447.6 billion as of end-February, up $4.83 billion from a month ago.

A record-breaking streak in FX reserves was snapped in January. But the surge renewed amid reversal in the greenback value.

The benchmark U.S. dollar index against a basket of major six currencies lost 0.4 percent on month to 90.13.

Securities, which make up the bulk of the total FX reserves, came to $409.6 billion, adding $5.06 billion from a month earlier. 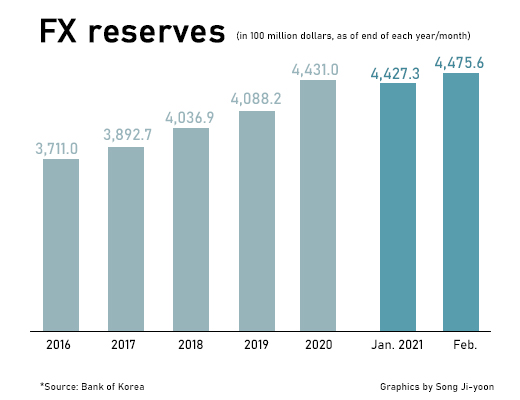 이미지 확대
The special drawing rights from the International Monetary Fund (IMF) rose by $20 million to $3.6 billion. The reserve position, or portion of required quota of currency held with the IMF that can be withdrawn, remained flat at $4.81 billion compared to January.

Gold reserves, whose value is recorded at purchase price, stayed unchanged at $4.79 billion.

Cash deposits in foreign bank accounts slightly thinned to $24.74 billion at end-February from $24.99 billion in the previous month.

Korea held the world’s ninth-largest FX reserves as of end-January with $442.7 billion. The top three were China with $3.21 trillion, Japan with $1.39 trillion and Switzerland with $1.07 trillion.