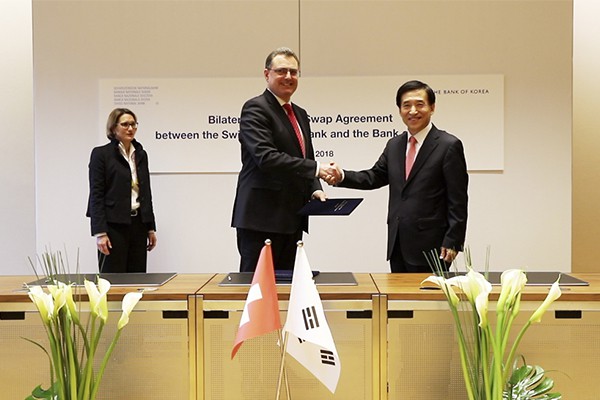 South Korea and Switzerland will extend their currency swap deal for another five years in a preemptive move to ensure financial security amid lingering economic and financial uncertainties from protracted Covid-19 pandemic.

The Bank of Korea (BOK) said Monday it agreed with the Swiss central bank to roll over bilateral three-year swap deal’s expiry on Monday to March 2026. The terms will stay the same - 10 billion Swiss francs ($10.9 billion) limit – with more comprehensive purpose than the original agreement, the Korean central bank added.

The Swiss franc trades as six key currencies, along with currencies of the United States, the eurozone, the United Kingdom, Canada and Japan, enabling a stronger safety net for South Korea in case of contingency.

The BOK had extended a $60 billion swap deal with the U.S. Federal Reserve in December to the end of September of 2021.

By Kim Jung-hwan and Lee Soo-min