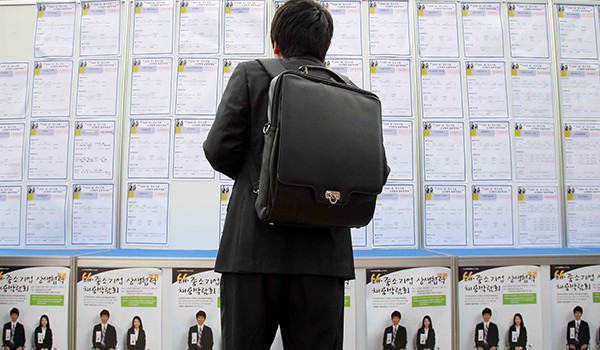 The number of jobs for wage workers grew 369,000 or 2 percent to 19,108,000 as of the end of August last year, according to the data released by Statistics Korea on Thursday.

But workers under the age of 20 lost 86,000 jobs or 2.6 percent from a year ago, extending its losing trend for the third consecutive quarter as Covid-19 devastated the services sector that provides the bulk of part-time work for young people.

Those in their 30s also saw a 1.5 percent or 64,000 decline in the number of paid jobs over the period, marking a downward trend for four straight quarters. 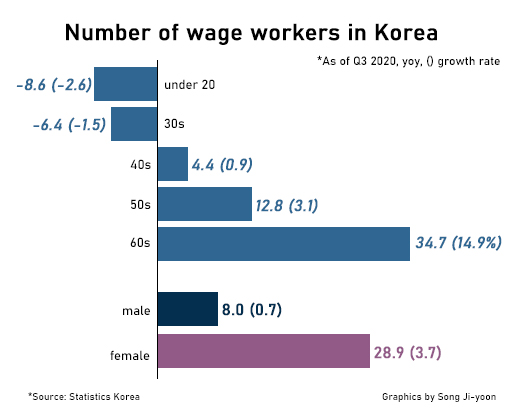 이미지 확대
“The number of salary jobs for those in their 20s and 30s declined mostly in the manufacturing, business leasing, wholesale and retail and construction sector,” said Kim Jin from the administrative statistics team at the agency. “Those who are in their 50s and 60s saw a sharp increase in the number of jobs in the public administration, health care and welfare industries due to the government’s job creation project.”

By gender, the number of jobs for male workers added 80,000 and female employees 289,000. Jobs for female workers mostly increased in the healthcare, welfare, public administration and educational service sectors, the data found.

By industry, the manufacturing industry accounting for the largest 21.5 percent share in the job market shed 87,000 jobs, the sharpest drop since the first quarter in 2018.

The hospitality and restaurant businesses lost 25,000 jobs due to the Covid-19 fallout.

The public administration sector added 177,000 jobs, recording the highest on-year gain since 2018 on the back of state-led job creation project.