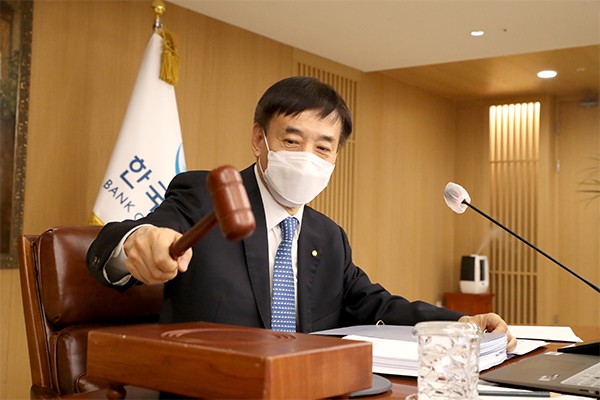 The Bank of Korea (BOK) on Thursday held policy rate on hold at the historic low of 0.50 percent Thursday and echoed the U.S. Federal Reserve that it won’t rush to raise rates despite signs of inflationary pressure from the supply-end.

“Currently, economic uncertainties are very high as we can’t be sure how the Covid-19 spread will change and how much the vaccines work,” said BOK Governor Lee Ju-yeol in an online press conference after the monetary policy meeting.

“It is not a time to speak of rate hike or monetary policy normalization,” he emphasized.

As largely expected, the central bank chose inaction after last back-to-back cut in the second quarter of last year amid peak in Covid-19 pandemic. The vote at Thursday’s meeting of the seven-member board was unanimous. BOK governor Lee Ju-yeol in his appearance at a National Assembly hearing on Tuesday stressed loose policy will stay intact to support the economy in fragile recovery pace.

The bank will maintain the accommodative monetary policy and closely monitor the virus developments and the policy effects, it said in the minutes. 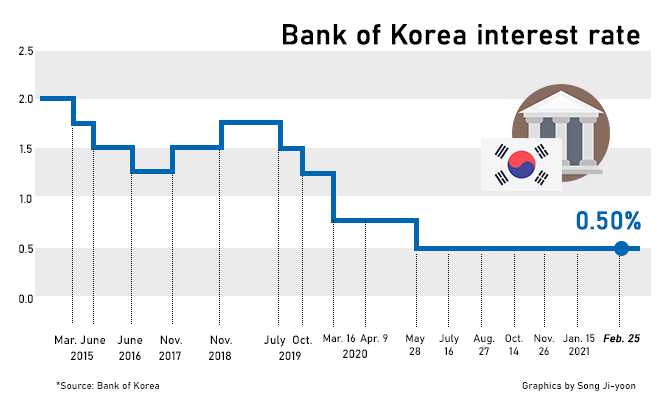 이미지 확대
The central bank projected a 3.0 percent GDP growth for this year and 2.5 percent for next year, unchanged from the earlier forecast on Nov. 26. Foreign institutions like the International Monetary Fund (IMF) recently have adjusted up their growth outlook for the Korean economy this year, suggesting the country is on path for mild recovery. Korea reported the biggest contraction of 1.0 percent last year since 1998 when the country was under international bailout.

Inflation was forecast to rise 1.3 percent this year, raised 0.3 percentage point from earlier estimate, and 1.4 percent next year. The positive turn for this year comes amid rising oil prices and expectations for a “moderate” economic recovery.

“A visible and stable recovery in domestic demand will take time,” Lee said. But when if suppressed consumption bounces back, inflationary pressure may accelerate, “a possibility we must take into account,” he added.

The BOK however is under pressure with market yields moving faster away from the benchmark in line with the U.S. Treasury movement, bringing back the specter of a taper tantrum that had rocked emerging markets in 2013 after the U.S. Federal Reserve hinted at phasing out of the central bank’s massive quantitative easing following the 2008 meltdown and normalizing rates.

이미지 확대
The 10-year government bond yield by midday Thursday gained 3.4 basis points to 1.885 percent, and the longer-dated yield also hovered close to 2 percent. Rising market yields could accelerate tightening pressure which could splash cold waters on the asset market as housing and stock frenzy had been mostly financed with borrowings.

Other financial markets recovered, relieved by Fed chair’s assurance that the bank was in no hurry in raising rates or begin trimming its bond-purchase program. Kospi rebounded back above 3,000 by gaining 3.5 percent to 3,099.69. The Kosdaq also rose 3.3 percent to 936.21 on Thursday.

Household debt hit 1,630 trillion won ($1.5 trillion) as of the end of December after gaining 44.5 trillion won in a quarterly record in the fourth quarter alone.

Producer prices have been strengthening for the second month this year as prices from fresh food, oil, poultry to processed and dining food jumped on extreme climate conditions and import prices.

Exports in the first 20 days of February gained 17 percent on year, extending double-digit growth streak for the third month.