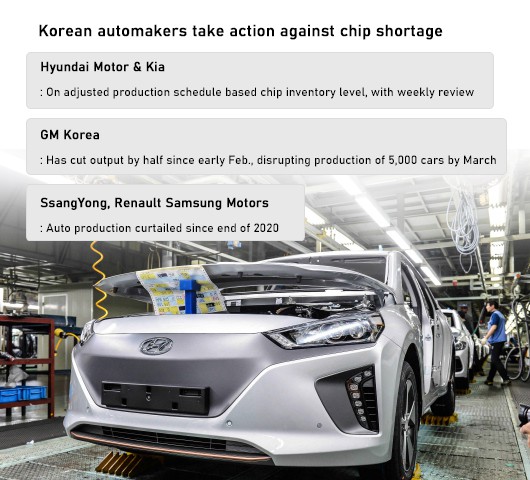 이미지 확대
Chip shortage has begun to affect No. 5 car-producing South Korea, with the disaster catching up with the country’s biggest carmakers Hyundai Motor Co. and Kia Corp.

The flagships under Hyundai Motor Group are checking inventory levels and adjusting production volume on a weekly basis. They may have to unplug some assembly lines if inventories run out as car demand has heated up faster than expected at home and abroad.

The two automakers responsible for 83 percent of the finished car market in Korea need 100 chips per car on average.

“If the two also end up cutting output due to automotive chip shortage, the trouble will spill over to partners and contractors,” an industry expert observed.

An official from Hyundai Motor said the company has adjusted the production schedule to run assembly lines for cars with chips in stock. For some models, the firm has been using compatible chips, the official added.

GM Korea, the local unit of global auto giant General Motors already has trimmed the auto output at its Bupyeong No. 2 plant in Incheon earlier this month, according to industry sources on Tuesday.

Broader factory shutdown in Korea may materialize in March, according to Lee Hang-gu, a senior analyst at Korea Automotive Technology Institute.

Global automotive chip shortage has disrupted car production across the world. Volkswagen has gone under a reduced production schedule after closing its factory in Germany for two weeks last month. Ford has suspended auto assembly lines in Mexico and Germany, while another American auto giant GM has partially shut down factories in the U.S., Canada, and Mexico.

According to IHS Markit, the automotive chip shortage is expected to affect the production of 1 million cars worldwide in the January-March quarter.

By Seo Jin-woo and Cho Jeehyun